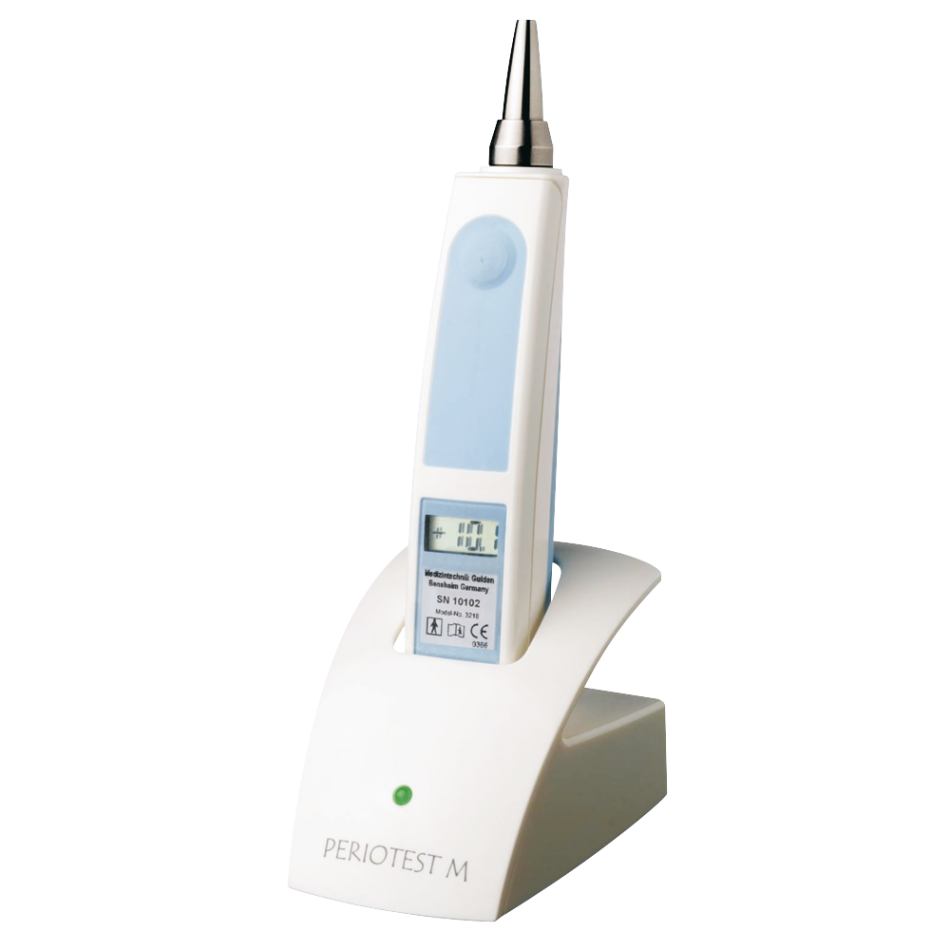 Periotest values seem to differ between the gingiva former, abutment placement and after single crown cementation on implants.

Materials and Methods
28 patients were selected and measurements were taken on 42 implants at the gingiva former level, abutment level and after single crown cementation. Mean values of all stages were then calculated and compared.

Results
An increased mean value of 2.7 was noted between the gingiva former and single crown final stages.

Conclusion
Positif Periotest values on implant single crown might be considered normal when the healing abutment measurements range between -3 and 0.

To evaluate the degree of osseointegration, various methods have been proposed: histology and histophotometry,1 removable torque analysis,2 pull and push through tests3 and x-ray examination.4 However, due to problems of invasiveness and inaccuracy new devices were needed. The Periotest device (Siemens AG, Bensheim, Germany) Fig.1 is an instrument specially developped for the diagnosis of periodontal diseases.5 It can also be used to assess the bone anchorage of implants6,7,8 and monitor their stability.9 The range in Preiotest® values (PTV), shown by clinically immobile dental implants, depends on the damping characteristics of the surrounding tissues (bone in successful implants and fibrous tissues in failed implants).10 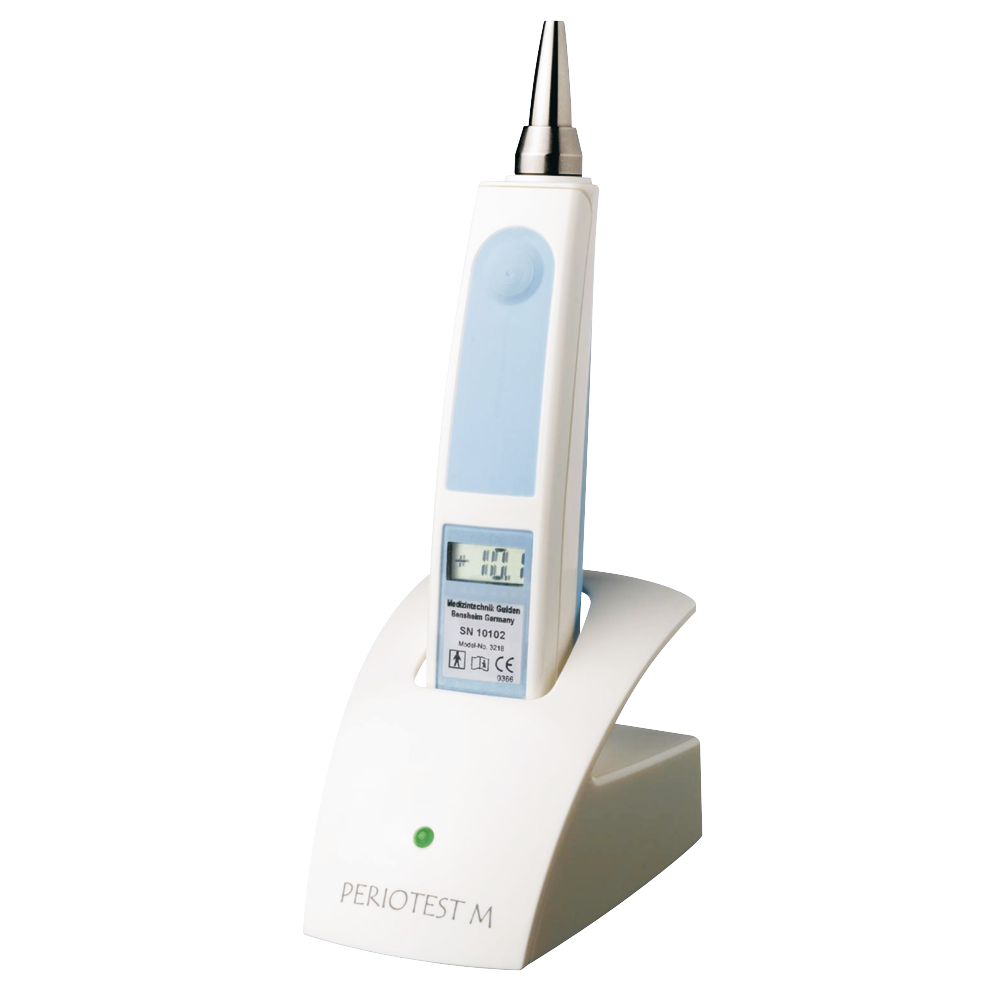 Periotest measurements give better results when measurements are made bucally during intra and interobserver tests. It is a reliable technique for the quantification of the implant stability.11 When comparing the Periotest to other systems, the Periotest is reliable on implants with a good stability and is more reliable when implants are less stable.12

A successful implant value should be inferior to zero as directed by the fabricant, but some positif measurements were collected on well anchored implants when taken at different steps of the prosthetic treatment. That is why further investigation was needed.

The purpose of this study was to determine the periotest mean values of measurements for implants at 3 different restoration stages: gingiva former in place, abutment screwed on implant and single crown after cementation, in order to determine the variations of these mean values

42 implants (36 Deukega, 6 Zimmer suiss plus)on 28 patients were selected for the periotest measurements: 15 in the mandibule and 27 in the maxilla. The mean age of the patients was 52.2, the youngest was 38 and the eldest 74 years old. 16 weeks after implant placement the measurements at each implant were taken, first with the gingiva former in place, then with the crown abutment (Deukega solid abutment) Fig. 2, and finally after delivery of the final single crown. The prostethis was delivered in an average of 18 weeks after implant placement. The crown abutment was fastened with a torque ratchet at 30N. The crown measurement was performed after cementation with glass ionomer luting cement (Ketac Cem 3M Espe). The periotest measurement was performed as directed by the fabricant and: 2mm above the cervical gingiva. At least two measurements were made for each implant, if measured values were divergent, the measurement was continued until two subsequent values were identical.13 This value was then noted on the data sheet. Mean values on each three groups were calculated and compared, using descriptive statistical tests (mean and averages), in order to determine the difference between the three groups. 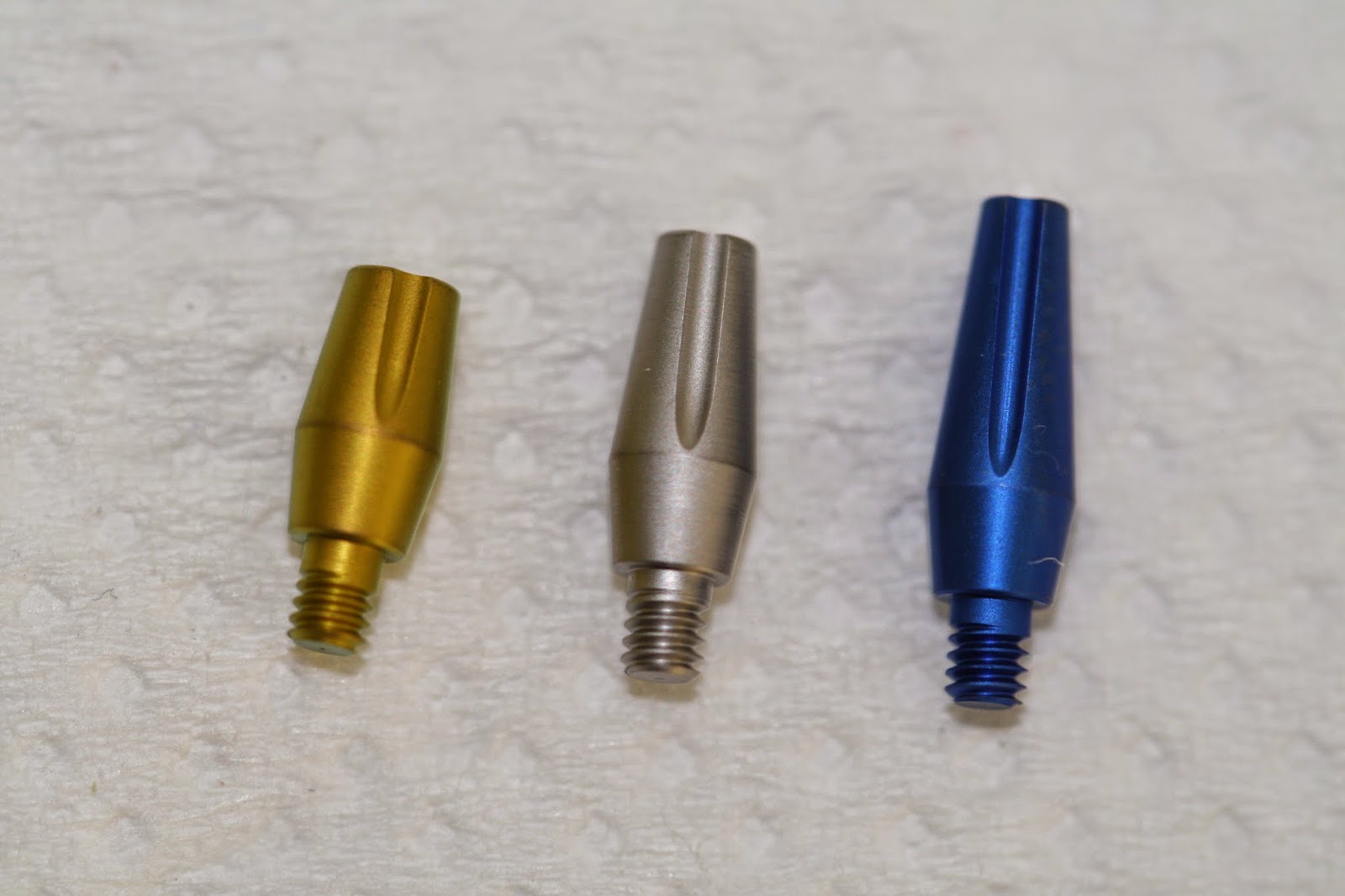 Table 1 and fig. 3 show the average differences and changes in the periotest measurements between the values of the placed gingiva formers, crown abutments, and recently placed single crowns. These changes amounting to -1.47 or -1.23 significantly differed from 0. The periotest value increased by 2.7 from gingiva former stage until the single crown placement. 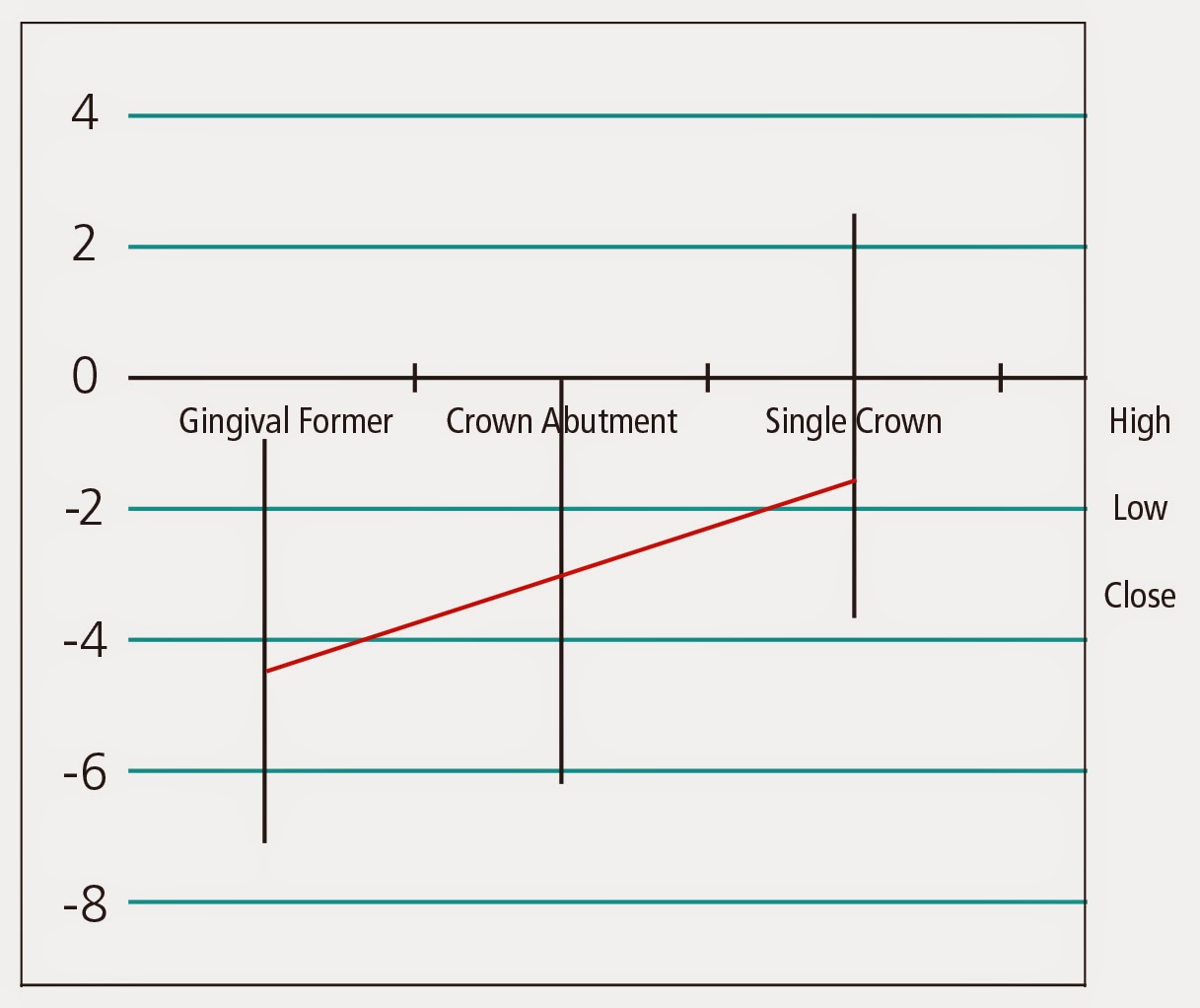 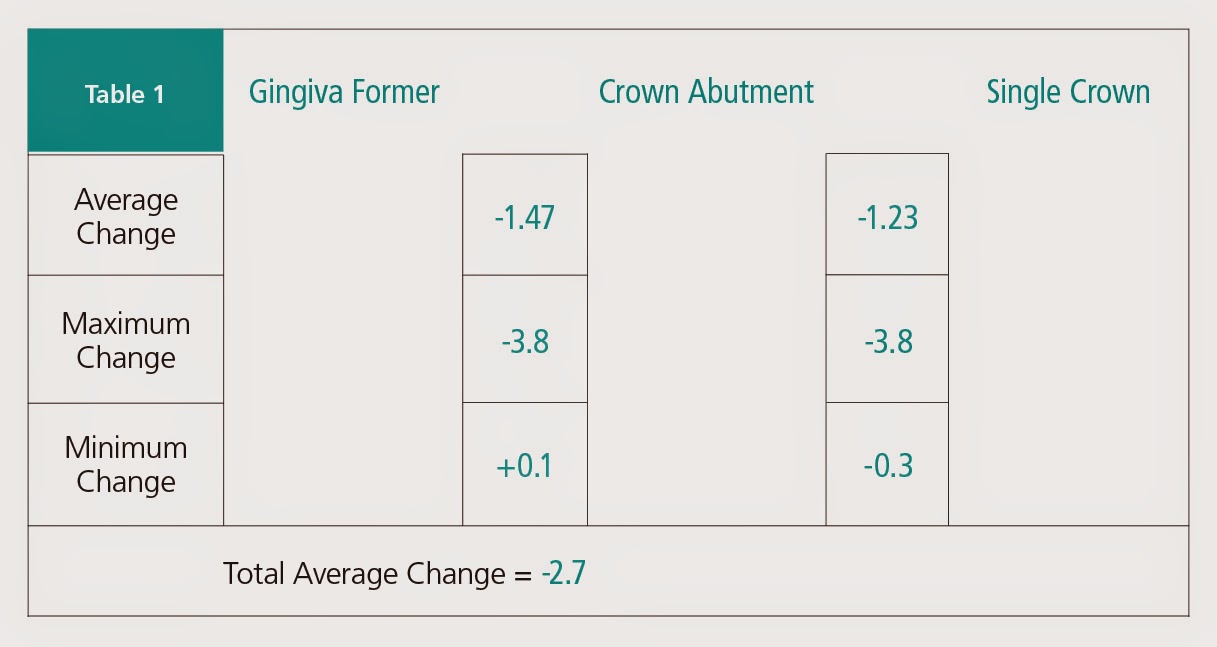 To check these findings using one type of abutments instead of two was of great interest. It was obvious that Periotest measurements at the three stages were not identical and were increasing. (fig 2)

The Periotest measurements on implants were made 2 mm above the cervical gingiva in order to eliminate the moment effect. In tissue level implants, this hitpoint will be almost at the same distance from the implant neck for all the implants included in this study.
On average, the increased mean value of 2.7 indicates that a positive measurement does not necessarly show a failure. For example, an implant measurement on the healing abutment of -1.5 can lead on average to a +1 to +2 measurment on the single crown. If the fabricant considers zero to be the reference for success of osseointegration this number should be reconsidered when the measurements are performed on the crown itself.
The increased mean value may be due to the cement layer interface and to the modulus of elasticity of the abutment screw.

Periotest measurments might represent a reliable method for the assessment of the implant-bone interface. If measurements are taken after crown cementation one should take into consideration the increased mean value of 2.712-14-15

Periotest values measured at gingiva formers increased on average by 2.7 after crown cementation. While measurements on the abutment revealed a mean increase of 1.23.

Finally, positif Periotest measurements on single crown should be considered as normal when values on healing abutment are between -3 and 0.