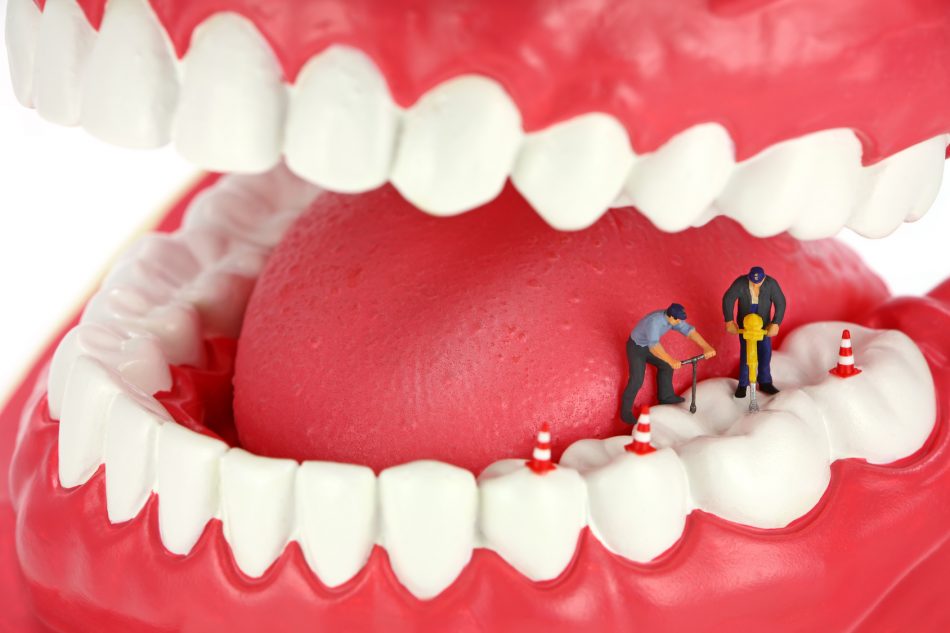 Anterior teeth may have aberrant anatomical variations in the roots and root canals. Root dilaceration is an anomaly characterized by the displacement of the root of a tooth from its normal alignment with the crown which may be a consequence of injury during tooth development.
This report aims to present a successful root canal treatment of a maxillary lateral incisor with unusual palatal root dilaceration (diagnosed with cone beam computed tomography) in which the access cavity was prepared from the labial aspect of the tooth to provide a straight line access to the root canal system which was instrumented using OneShape rotary file system and precurved K‑files up to size 50 under copious irrigation of 2.5% NaOCl using a side‑vented irrigation tip. The canal was then obturated using the warm vertical compaction technique.

A full understanding of root and root canal morphology is a fundamental prerequisite for successful root canal treatment. 1 This includes absolute awareness of landmarks associated with normal and unusual morphology encountered in daily practice. 1 Maxillary anterior teeth are well known to have a straight single root that usually encases a single root canal; nevertheless, clinicians may still face a root/root canal configuration with an aberrant morphology resulting in challenges even in accessing the root canals. 2

According to the American Association of Endodontists glossary of endodontic terms, dilaceration is defined as a deformity characterized by displacement of the root of a tooth from its normal alignment with the crown which may be a consequence of injury during tooth development. 3 Common usage has extended the term to include sharply angular or deformed roots. 3 The prevalence of dilacerated roots in the human dentition varies in different population groups which can reach up to 16%,[4‑8] and the mandibular third molars usually show the highest prevalence among other tooth types which can reach up to 30.92%. 9

With the benefit of acquiring three‑dimensional (3D) information, cone‑beam computed tomographic (CBCT) imaging has been increasingly used in the endodontic treatment of anomalous teeth, especially when conventional radiographs provide limited information and further details need to be identified. 10,11
This report aims to present a successful root canal treatment of a maxillary lateral incisor with unusual palatal root dilaceration diagnosed with CBCT.

A 23‑year‑old male patient was referred for root canal treatment of an anomalous maxillary left incisor tooth (#22). His medical history was noncontributory, and the patient denies any history of trauma. On clinical examination, the tooth #22 showed a cervical carious lesion, gingival recession, and the tooth was tender to percussion [Figure 1a].
The tooth was previously treated by the referring dentist with an access cavity sealed with a temporary filling material. The referring dentist reported the occasion of an accidental cervical labial perforation during an attempt to prepare an access cavity from a palatal approach.

A CBCT scan (J morita, Osaka, Japan) was performed to better visualize the complexity of the root morphology. The sagittal section showed an abrupt curvature of the root starting from the coronal third palatally [Figure 1b]. The tooth was diagnosed as previously treated with symptomatic apical periodontitis.

In the first visit and after rubber dam isolation, the temporary filling was removed, and a large perforation defect was noted in the coronal third of the root. The access was irrigated with normal saline and 2.5% NaOCl, and the perforation area was sealed using a glass ionomer cement (Fuji Fast, Tokyo, Japan).

The root was severely curved at the cervical level of the tooth to the extent that the entire crown has to be removed to have straight line access to the root canal from the lingual aspect [Figure 1b]. A calcium hydroxide paste was placed inside the canal, and the tooth was restored with a temporary filling material (Coltosol, Coltene, USA).

In the subsequent visit, the access cavity preparation was performed through the cervical portion of the labial wall to provide a straight line access to the canal [Figure 1c]. An ultrasonic tip (ET20 , Satelec, Merignac, France) was used to ensure adequate removal of the remaining pulp tissues in the pulp chamber and horns. Gates Glidden burs size 2 and 3 (Mani, Tochigi, Japan) were used for coronal flaring, and the working length determination was performed using an electronic apex locator (Root ZX, J. Morita, Irvine, CA, USA).

The canal was obturated using the warm vertical compaction technique with the aid of System B (Kerr Endo, Orange, CA, USA), and a resin‑based sealer (Adseal, Meta, Korea) was used as the root canal sealer. The backfill was performed using thermoplasticized Gutta‑percha (Obtura II, Spartan, USA) [Figure 1e‑h]. Machtou pluggers (Maillefer, Ballaigues, Switzerland) were used for vertical compaction. The access cavity was then restored with a temporary filling material (Coltosol, Coltene, USA). In the follow‑up visit, the tooth was asymptomatic, and the patient was then referred back to the referring dentist. 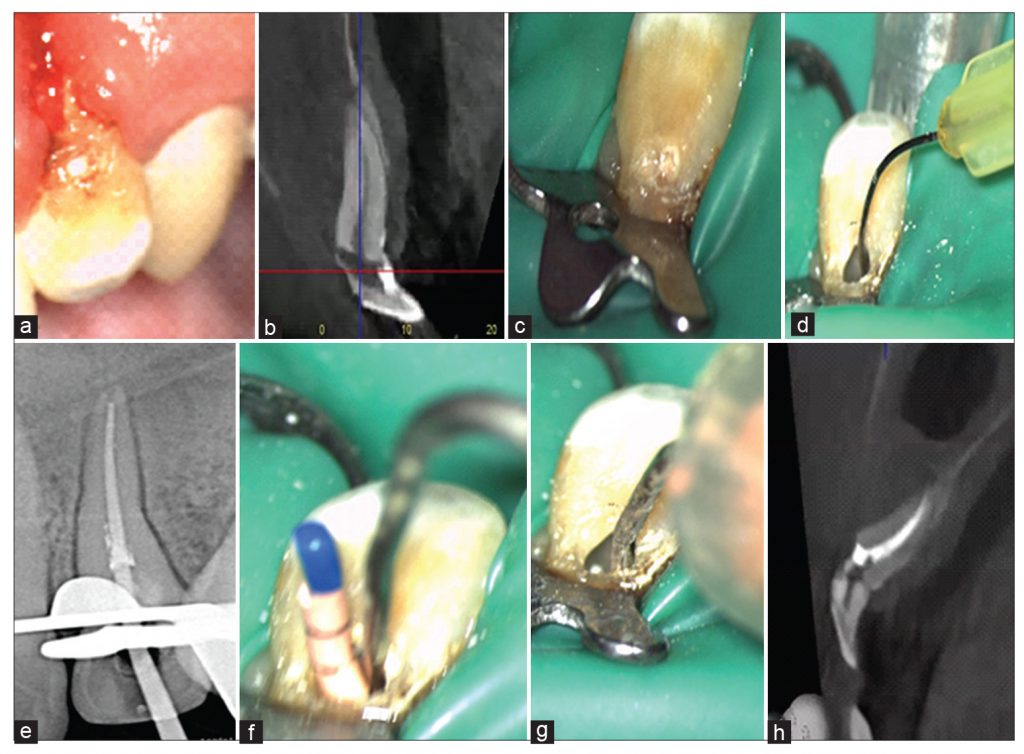 Prognosis of a root‑filled tooth mainly depends on adequate debridement of the root canal system while maintaining the original root canal shape after instrumentation. 12 This report presents endodontic management of a maxillary lateral incisor with an unusual palatal root dilaceration.

Chohayeb13 investigated the dilaceration pattern of 480 maxillary lateral incisors and found that more than half of the samples showed a dilaceration in a distolabial direction, and palatal dilacerations of the apical third of the root apex were observed in only 10.4% of the study samples. Literature shows controversy for the etiology of root dilacerations, but mechanical trauma to the primary predecessor is the most widely contributing factor. 14, 16

However, local traumatic injury seemed unlikely to be the cause of dilacerations in this case, considering that the patient had no history of trauma. This probably supports the fact that root dilaceration can be described as a dental anomaly and not necessarily to be a sequela of trauma. 15

Diagnosing root dilacerations before commencing root canal treatment is essential to allow proper and safe use of endodontic instruments within the confines of the curved roots. 14, 17 If the dilaceration occurs mesially or distally, it can be clearly identified on a periapical radiograph. 14

However, when the dilaceration is toward the labial or palatal, the X‑ray beam passes through the deflected portion of the root in an approximately parallel direction, and the identification of the dilaceration portion can be rather difficult. Apart from being in a palatal direction, the extension of root dilaceration from the coronal portion of the root along the root apex is another interesting finding in this case, which was the main cause for the labial root perforation during access cavity preparation from a lingual approach. Failure to recognize the multiplanar nature of the dilaceration is one of the factors that might contribute to the higher rate of unfavorable outcomes of endodontic treatment. 14

The application of CBCT in such cases can help to determine the exact position and angulation of the dilaceration. 14

A number of factors may complicate the treatment of root dilacerations. Therefore, when attempting to perform root canal treatment procedures, the clinician must undertake great attention to avoid mishaps in teeth with significant dilacerations. 14

In the present case, the access cavity was prepared from the labial aspect of the tooth to provide a straight line access to the root canal system encased in the dilacerated root. In addition, an ultrasonic tip was used to ensure adequate removal of the remaining pulp tissues in the pulp chamber and horns to prevent coronal discoloration. 18
Notably, labial access cavity preparation in anterior teeth has been described in the literature, and it is indicated in instances of teeth crowding (when the lingual/palatal surface is not accessible), extensive labial decay, and unusual shape/curvature of the root canal. 19, 20 Compromised esthetics have been considered as one shortcoming of the labial approach; 20 however, this issue can be managed properly using modern tooth‑colored restorative materials. 20

Complete biomechanical debridement of such canals is challenging. In the present case, the OneShape NiTi rotary file system was initially used followed by precurved K‑files under copious irrigation. As a general rule, dilacerated root canals are not suitable for the use of NiTi rotary files because of the severe coronal extent of the curvature that must be negotiated. 14

However, due to the large size of the canal and straight line access provided by the labial access cavity, the OneShape system was able to create a glide path for the subsequent hand files.

Owing to the well‑documented antimicrobial properties of calcium hydroxide, it was used as an intracanal medicament to increase the predictability of the treatment. 14 The labial straight line access has also facilitated the application of warm vertical compaction technique procedures to ensure 3D obturation of the root canal system.

Dilacerated teeth do pose a number of diagnostic and management challenges. The clinician must undertake great attention to avoid instrumentation‑related mishaps in teeth with significant dilacerations.