Attitude Toward Malocclusion and Desire for Orthodontic Treatment 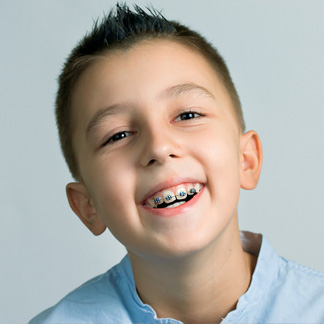 During the last 20 years the Kingdom of Saudi Arabia has had a marked increase in population and a massive development in various aspects of life.(1) Consequently, an increase in the demand for health services including oral health became evident. As growing public interest in oral health increased the demand for orthodontic treatment also became more noticeable in dental practices. Demand for orthodontic therapy may be influenced by a patient’s perceived need for treatment and by the anticipated improvement in self-image.(2,3) Social pressures as well as cultural and socio-economic background have been reported as reasons for initiating orthodontic treatment.(4)

Thus, knowledge about a lay person’s attitude to malocclusion is becoming increasingly important in the context of providing orthodontic treatment. Lew(5) has stated that “practitioners should focus their attention beyond the orthodontic mechanotherapy to the more subjective aspects of patient discomfort and attitude towards treatment.”

Several studies have concentrated on clarifying the role of malocclusion on an individual’s perception and satisfaction with dental or facial appearance.(6-8) Enhancing appearance and improving psychosocial status have been identified as important motivating factors behind the decision to initiate orthodontic treatment.(9-14) Most of these studies investigated the attitudes of adults or adolescents. Less research on the psychosocial attitude toward malocclusion has been conducted on pre-adolescent children and how this compares with adolescents attitudes.

Knowledge about orthodontic attitudes in pre-adolescents would be beneficial especially since early orthodontic treatment could be advantageous in preventing further malocclusion complications. Furthermore, knowledge about agerelated patient concerns may guide and assist the orthodontist in educating potential patients and their parents and in providing advice. A review of the literature has revealed several studies that investigated the prevalence and severity of malocclusion for specific ethnic groups, age distributions and country-specific populations including Saudi Arabia.(15-17)

An epidemiological study on a subpopulation of Riyadh City, specifically Saudis aged 9 to 17 years, was conducted. A total sample of 1459 subjects was selected from Riyadh public schools from fifth through eleventh grades. A list of all public schools in Riyadh was provided by the Ministry of Education. Together with each school name was included the name of the precinct where the school was located, the number of fifth through eleventh grade classes, the number of the corresponding students, and the school identification number.

A systematic random sampling selection was done to ensure a representation which reflected gender, geographic area and class grades. Two formulated lists, one for boys and one for girls classes within each school were sorted by grade and geographical location. Then proportionately sub-samples were taken from each stratum. For logistical reason, no subsampling within class was carried out, as all students from selected classes were taken into the sample.

The questionnaires were distributed to all students in class. They were completed in the same setting, and then collected. No students refused to complete the questionnaire.

To fulfill the purpose of this study the analyses were primarily descriptive in nature, and involved calculating frequency

tabulations, and cross-classifications for categorical data. The statistical tests that were carried out were limited to comparisons of proportions with the Chi-Square.

Demographics: The age of the present sample ranged from 9 to 17 years with the median age being 13 years. Table 1 presents the age range, profile categorized into groups, with one-year intervals.

Dental Appearance: As a measure of dental appearance satisfaction, the question “do your teeth prevent you from smiling” was asked. Respondents who answered “yes” were 32.6% indicating that they were dissatisfied with their dental appearance. Satisfaction was also analyzed with respect to age. Table 2 shows that there was a consistent level of dissatisfaction (27 – 44%) in the different age groups. Children below the age group of 10 years reported a higher level (44%) of dissatisfaction and children above 16 years reported 36% dissatisfaction. However there was no significant difference among different age groups (P=0.144). 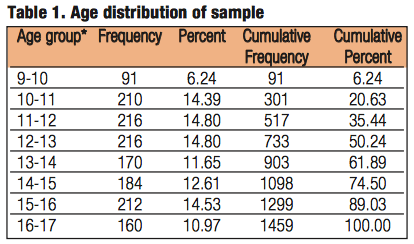 *The upper value of the interval is closed ended (including that number), whatsoever value is open ended (does not include that number).

Response to Orthodontic Braces: Seventeen percent of the subjects felt that orthodontic braces were ugly. When investigating this issue across different age groups, a fairly constant rate was found (13% – 17%) among the various age groups with the exceptions of the 10 – 11 year-old children (20.8%) and those older than the age of 16 (19.9%).

Differences observed were not statistically significant (P=0.544). Twenty percent responded that the braces could be quite painful. The results revealed that children at the age of 16 years and above expressed a slightly greater tolerance to braces than other age groups (Table 2).

Thirty-seven percent of the subjects considered having orthodontic braces to correct malocclusion as important as having corrective medical eyeglasses for restoring improper eye vision.

The rates across the different age groups were almost similar (Table 2) with no significant statistical differences (P=0.759). 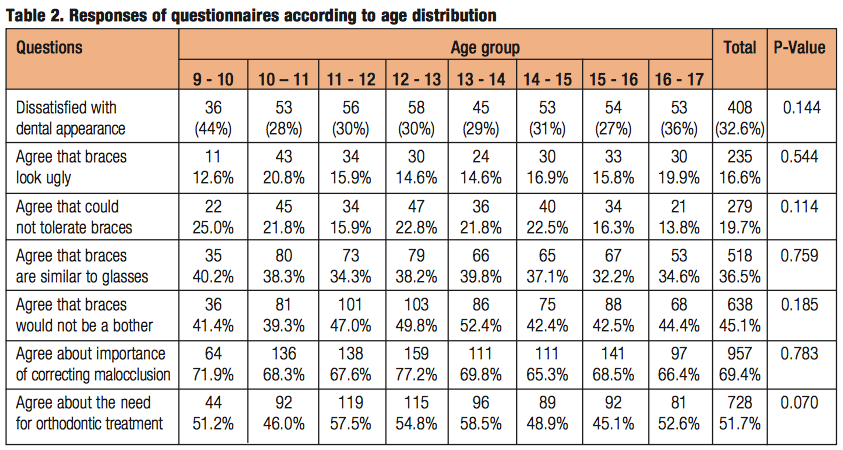 Correcting Malocclusion: The finding revealed that 92% of the subjects agreed that proper occlusion was important.

Only 25.1% of subjects responded that they would postpone orthodontic treatment in favor of taking a vacation, if for financial reasons, a decision had to be made. With regard to the different age groups the rates varied considerably between 15.7% in the 9-10 year-old age group to 35.4% in the 14-15 year-old age group (Table 3). There was a statistically significant relationship between age-groups and this question (P<0.0001).

Desire for Orthodontic Treatment: When subjects were asked “do you demand orthodontic treatment”, 51.7% of the subjects indicated “yes”. When investigating the response rates across the age groups, the maximum positive response rate was found in the 13-14 year-old age group (58.5%) and the minimum in the 15-16 year-old age group (45.1%). There was variation in the rates across the different age groups (Table 2) but no discernible pattern was observed.

When the subjects were asked to identify the main reason justifying the desire for orthodontic treatment, esthetics was the main reason chosen (41.3%), followed by proper occlusion (31.3%), ability to chew (14.3%), self-confidence (10.5%), and imitating friends (2.6%) as shown in Table 4. In reviewing the percentages across the age groups, the only detectable trend was that associated with esthetics. The rate increased in the older age groups compared to the younger age groups.

The present sample was randomly selected from the Riyadh public school system through a statistically designed method. The city of Riyadh is the capital of Saudi Arabia and is similar to other capitals of the world where people have migrated from different parts of the country to live in the capital.

Therefore, it can be assumed that Riyadh is relatively representative of the whole of Saudi Arabia. Although age-related changes in malocclusion concerns ideally should be studied longitudinally, the present study allowed comparison between different age groups by means of a cross-sectional study. Such a study can give an indication of changing attitudes toward malocclusion with age.

Knowledge about age-related attitudes to dental appearance may guide efforts in assisting the education of potential patients. Newman et al.(20) reported in their study that satisfaction with appearance was strongly influenced by age. This trend was not detected in this study. There was a higher level of dissatisfaction among 9-10 year-old children. However, it was not statistically significant. It could be due to “the ugly duckling stage” as mentioned by Broodbent.(21)

The attitudes of subjects towards various aspects of treat- ment such as braces’ appearance and tolerance were assessed. Results indicated a positive attitude towards various aspects of treatment. This result is in agreement with Gavely and Orth(22) who reported that students were prepared to accept treatment and to wear the appliances especially when treatment level needed increases. A further indication of the positive attitude of the sample in this study was provided when the relative value of orthodontic treatment was investi- gated. Approximately 75% of subjects responded that they would postpone a vacation in favor of orthodontic treatment if, for financial reasons, a decision had to be made.

The data revealed that desire for orthodontic treatment among subjects in the sample was high. Approximately 52% of the subjects indicated a demand for treatment while only 31% of subjects reported dissatisfaction with their dental appearance. This finding suggests that, although some subjects were gener- ally satisfied with their dental appearance, they still tended to desire orthodontic treatment, perhaps for slight malalignment of teeth. Similar findings were reported by Malmgren(25) who studied 147 children of a comparable age group. He found that 89 children (60.5%) were dissatisfied with their dental appear- ance, but, 74.8% thought that their teeth needed correction. Malmgren(25) speculated that this discrepancy between children dissatisfied with their teeth and those who thought they required orthodontic treatment might have been due to either a failure to understand the questions passed or that the children wanted to be treated even though they were not cer- tain that there was something wrong with their teeth. In con- trast to this, Tulloch et al.(26) showed that perception of dental attractiveness and treatment need were similar. Other stud- ies(8,27) measuring orofacial perceptions in teenagers or adults indicated that, while people seemed mostly aware of their mal- occlusion traits, they did not perceive a need for treatment.

Esthetics was the main reason given in the present study for justifying the need for orthodontic treatment, followed by proper occlusion and the ability to chew. This is in agreement with many investigators who reported that dental appearance was the main motive for seeking orthodontic care.(11-13) Salzmann(11) has stated that demand for orthodontic treatment was motivated primarily by “esthetic values as well as by the high social premium our society places on well aligned teeth and attractiveness in general”. Further supportive evidence for this view is provided by Gochman(13) in his study of 774 school children aged 8-17 years, where a large proportion of the sam- ple mentioned social improvements, appearance, and self-con- fidence as the major benefits of the treatment. Moreover, the need for treatment to improve esthetics in the present study was found to increase with age. This is in agreement with that of Gochman.(13) It appears, therefore, that many people seek treatment for a mixture of reasons, with the primary motivation being the need for acceptable dento-facial appearance.

No clinical examination was conducted in this study. Thus, no correlation between satisfaction of dental appearance and perception of orthodontic treatment needs relative to various occlusal traits was measured. Conflicting results regarding the effects of various occlusal traits on concern for dental appear- ance have been reported in the literature. For example, Helm et al.(29) found that certain occlusal traits, such as extreme overjet and reverse overjet, were causes for concern. In con- trast to this, other studies(8,24-27) have suggested that self-per- ception and clinical findings were poorly correlated.

These conflicting results mentioned emphasize and highlight the need to establish exactly what the patients dislike most about their appearance. Therefore, further investigations of what clinical parameters and what levels of malocclusion severity lead to demand for orthodontic treatment are need- ed to have a better understanding of the attitude towards malocclusion and the perception of treatment need. Another issue which should be addressed is the fact that it is usually a

parent who brings a child for both dental and orthodontic care. Thus, an understanding of the role of parents’ percep- tions of the child’s appearance must be considered from the standpoint of treatment.

This project (F-1071) was supported by College of Dentistry Research Center (CDRC) King Saud University. The authors would like to express their gratitude to the School Health Services, Riyadh, Saudi Arabia for their valuable assistance in facilitating access to the Riyadh public school system for data collection and would like to thank the principals, teachers, and students of the schools for their understanding and cooperation during this study.

This article was reprinted with permission from the Saudi Dental Journal.
Volume 17, No. 1, January – April 2005.