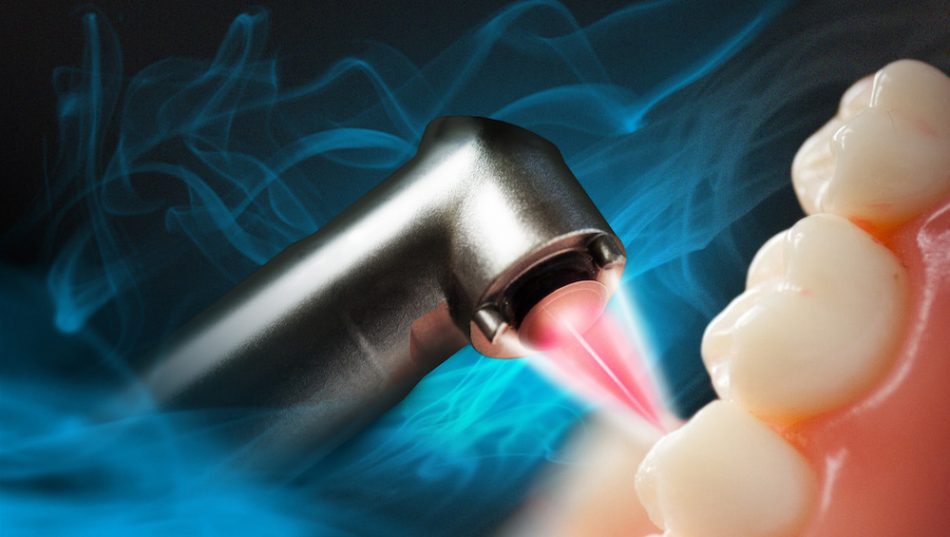 In 1960, the American physicist Theodore Maiman created the first Laser1 at Hughes Research laboratory, Malibu – California. He was able to take a rod of ruby, a synthetic crystal, to energize it with a flashlamp & to produce red laser light in the visible spectrum at 694 nm, that he could see.

In 1965, Ralph H. Stern and Reidar Sognnaes2, from the University of California – Los Angeles, used the ruby laser to vaporize enamel and dentin. Hard tissue ablation with ruby laser reported an increase in pulpal temperature with detrimental effects.

Technology should wait until 1989, when the American dentist Terry Myers designed the first Nd:YAG laser specifically for dentistry. Since then, clinical applications continue to increase making laser use one of dentistry’s most exciting advances.

Nowadays, available commercial dental lasers are in the range of 377nm to 10600nm and are all nonionizing electromagnetic radiation i.e. they do not cause any mutations in the cellular DNA3 components like gamma-rays and X-rays.

Some are in the visible spectrum of light (about 380nm – 750nm) such as Alexandrite laser 377nm violet light that has a very high absorption in calculus and not so high absorption in dentin. Another laser in the visible spectrum is, the new blue diode laser 445nm, that is very highly absorbed in hemoglobin, almost 500 times as well as 810nm diode lasers permitting very easy soft tissue ablation. Argon laser, no longer available for dentistry, that has 2 wavelengths one 488nm is blue light for composite curing and the other is 514nm in the intense green light, helpful for soft tissue ablation. The frequency doubled Nd:YAG 532nm green color laser also called KTP (Potassium Titanyl Phosphate) laser very useful for photochemical bleaching. He-Ne (Helium Neon) laser has 632nm red light or Diagnodent caries diagnostic laser uses a visible red wavelength of 655nm etc.

Currently, all available dental lasers are soft tissue lasers. The dentist can choose from the variety of wavelengths, because they are all absorbed by at least one of the soft tissue components.

Infrared dental wavelengths can be divided in 2 major categories:

• Short laser wavelengths in the near-infrared spectrum (800–1100 nm) such as diodes and Nd:YAG lasers are essentially transmitted through water, showing a low absorption coefficient in water5. This explains their deep scattering into healthy soft tissue (0.8-6mm). However, they are selectively absorbed in areas of inflammation by blood components and tissue pigment which make them soft tissue lasers by excellence6. There is also minimal to no interaction of diodes and Nd:YAG lasers with healthy dental hard tissue, which makes them suitable for soft tissue procedures only7.

All surgical applications for lasers rely on the conversion of electromagnetic energy into thermal energy8.

However, they can also be used for periodontal procedures where periodontal pocket sulcular debridement predominates. They also may be applied for laser-assisted tooth bleaching, dentin desensitization, direct laser irradiation in conventional laser endodontic.

• Longer laser wavelengths, mid-IR and far IR such as Erbium family and CO2 lasers, present a very high absorption coefficient in water, and due to the high water content of oral mucosa (>70 – 90%), they are very selective for soft tissue procedures. Ablation of tissue is achieved through the nearinstantaneous vaporization of interstitial water, leading to an explosive fragmentation of tissue structure, making them soft and hard tissue lasers at the same time9.

These lasers (Er,Cr:YSGG, Er:YAG and CO2 lasers) may also be applied in periodontal therapy such as direct removal of calculus through scaling & root planning (SRP) the periodontal pocket, indirect laser irradiation and photoacoustic effet in endodontic procedure, treatment of mucositis & periimplantitis, all clinical situations of bone cutting and restorative procedures etc.

The case report that will be presented below was realized with a 980 nm diode laser. Diode laser is one of the most popular lasers because of its compact size, light weight, portable unit (fig.2) and relatively reduced cost while remaining efficient with beneficial effects.

Its active medium is a solid state, composed from semi-conductor crystal combining Indium, Gallium and Arsenide (InGaAs) that transform the electric current into light energy. It is a modern device with the foundation of modern electronics.

Depending on the clinical situation, the diode laser can be used in contact mode (incision, excision, surgery fig.3) or non-contact mode (PBM, bleaching, desensitizing fig.4 etc.).

Cutting tissue by diode lasers occurs through photothermolysis: Chromophores in the target tissue absorb the light energy rapidly, immediate rise in temperature with subsequent denaturation of tissue protein, as well as fragmentation and vaporization of the melanin, followed by vaporization of water content. So, it is temperature rise that causes soft tissue disruption. Depending on the temperature level reached at the surgical site, soft tissue are subjected to warming, welding, coagulation, protein denaturation, drying, ablation then vaporization or carbonization10.

Power settings of the diode laser device are adjustable, and the laser beam may be delivered in a constant continuous mode or in gated mode:

A) With continuous mode, there is a gradual increase in the temperature then heat generation gets much faster; there is tremendous risk to get uncontrolled damage (the amount of heat generated is translated directly into the amount of collateral damage)10.

B) With gated continuous mode, when using gated mode, there is still a rise in temperature, but the tissue has time to cool down during the thermal relaxation time, which leads to controlled collateral damage & lower thermal rise. This explains the general recommendation for laser use at low power and in gated mode for soft tissue procedures10.

Before surgery with the diode laser, the ultra-thin lasing fiber could be initiated (fig.5). This process allows capturing most of the energy (60% of the energy or more) at the end of the laser fiber and the incision is faster.

This is done by tapping the laser fiber on articulating paper while the laser is energized. Usually a 300µm tip is selected for surgical gingival cutting rather than a 200µm tip, because this latter is more fragile and breakable11.

Before cutting gingival tissue, the depth of the sulcus should be measured with a periodontal probe (fig.7). The bone level should be sounded and a biological width of 2-3mm should be respected in order to avoid any further periodontal damage12.

During surgery, the 300µm fiber tip is placed in contact with the tissue. This gives the clinician the essential tactile feedback which is absent with some other lasers such as CO2 lasers12. Excision is performed with gentle sweeping brush motions (fig.8). It is important to emphasize that the laser tip does not cut like a blade, but it vaporizes tissue layer by layer at the fiber end and not on the sides, since these latter areas are protected by the collimation cladding so the energy cannot be transmitted through the sides10. The correct technique is to avoid pressing on the fiber, but to simply guide it along the precise route desired, using light brush stroke to “paint away“ the amount of tissue to cut11, and to let the highly directed laser energy do the work. Water irrigation with a syringe is helpful to reduce the charred layers and to cool down the tissue; high aspiration removes the dangerous laser plume.

The inherent properties of laser light make diode surgical lasers the treatment of choice in cutting oral soft tissue because of their ability:

• No sutures, no dressings – healing by secondary intention. Another advantage is the production of surface coagulum when laser is used thus, preventing the need for sutures.

• Reduce the amount of bacteria & other pathogens on the surgical site

• Can be used for medically compromised patients15

3. Musale PK, Soni AS, Mujawar S and al., Use of Nd:YAG laser in the treatment of ankyloglossia for pediatric patient. Journal of Dental Lasers 2012;1(6):33-7