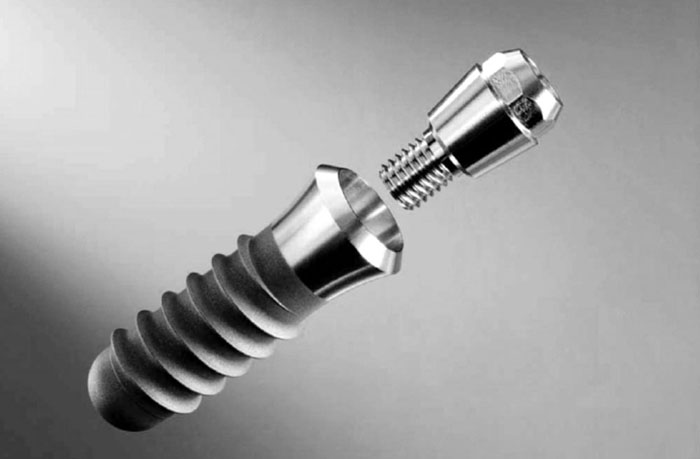 Titanium is known to possess excellent biocompatibility as a result of corrosion resistance and lack of allergenicity when compared with many other metals. Fluoride is well known as a specific and effective caries prophylactic agent and its systematic application has been recommended widely over recent decades. Nevertheless, high fluoride concentrations impair corrosion resistance of titanium. The purpose of this paper is to discuss the current data regarding the influence of fluoride on titanium corrosion process in the last years. These data demonstrate noxious effects induced by high fluoride concentration as well as low PH in the oral cavity. Therefore, such conditions should be considered when prophylactic treatment is indicated with patients having dental implants or other dental devices.

Titanium materials used for dental implants manufacturing are supposed to exhibit high corrosion resistance.1,2,3
Corrosion is defined as the process of interaction between a solid material and its chemical environment which leads to a loss of substance from the material, roughening of the surface, change in its structural characteristics, weakening of the restoration, loss of structural integrity, liberation of elements from the metal and toxic reactions.1,2,3
Many factors may influence corrosion in the oral environment such as type of materials, pH, temperature, humidity, oxygen and type of bacteria.4,5,6,7
High metal alloys used in dentistry are so stable chemically that they do not undergo significant corrosion in the oral environment.2 Most of commercially available implant systems are made of pure titanium or titanium alloy (Ti-6Al-4V).8 Titanium and its alloys provide strength, rigidity, and ductility, similar to those of other dental alloys. Whereas, titanium and its alloy have excellent biocompatibility, low density, low thermal conductibility, good mechanical properties and greater corrosion resistance in saline and acidic environments.9,10,11 Another property of titanium is passivity, which is the formation of a thin layer of oxides TiO2, however this stable oxide layer is not inert to corrosion attack.11,12,13,14
Saliva contains several viruses, bacteria, fungi and food debris. Many Gram+ and Gram- bacterial species form a major part of the dental plaque around teeth and also colonize mucosal surfaces.2,15,16 These microorganisms affect corrosion of metals by forming of organic acids during glycolysis pathways from sugars, which will reduce the pH. A low pH creates a favorable environment for corrosion.2

Moreover, different products used in oral cavity have innumerous substances that can interact with titanium. Fluoride is one of these corrosive chemicals which are present at different concentrations in toothpastes, mouthwashes, and other sources like tablets, drops or chewing gums due to its evidence-based anticariogenic effect.7,17,18
The increasing use of various titanium-based materials for dental implants and orthodontic brackets raises the question of their corrosion resistance in presence of fluoride ions, which are present in toothpastes and mouth rinses.4,19

The aim of this paper was to discuss published data on the role of fluoride on titanium corrosion in oral cavity and its clinical implications.

Results: A total of 39 references were used, focusing on the effect of fluoride prophylactic agents on titanium corrosion, leading to 30 in-vitro studies, 1 in-vivo and 5 literature reviews.

The effect of fluoride on the corrosive process

Dental use of fluoride has been considered the main method to protect the enamel and to reduce its dissolution; fluoride ions having the ability to interact with the enamel’s hydroxyapatite crystals forming fluorited hydroxyapatite or fluoroapatite. These minerals have greater lattice energy, higher crystallinity, and better resistance to dissolution than hydroxyapatite.19,20
However, corrosion behavior of pure titanium and titanium alloy investigated in artificial saliva are significantly affected by the presence of fluoride ions (added by NaF) as proven by electrochemical methods.4
Fluoride ions are very aggressive on the protective TiO2 film formed on titanium and titanium alloys. They incorporate into the oxide layer TiO2, and cause the breakdown of this protective passive layer21,22,23 This contributes to the formation of a hydrofluoric acid,24,25,26 which results in morphological variations, such as increasing roughness leading to plaque accumulation3,11,13 and possibly inhibition of osseointegration.2,3
Siirila et al. (1991) reviewed the effect of topical fluoride on titanium and concluded that toothbrushes used in contact with titanium surfaces should be as non-abrasive as possible and that long lasting contamination with topical fluorides should be avoided.27
Licausi et al. (2013) proved that titanium alloys are subjected to different mechanical actions (sliding or fretting), thus resulting in a tribocorrosion system, which is an irreversible material degradation process due to the combined effect of corrosion and wear.10
Commercial dental gels and rinses contain fluoride from 200 to 20,000 ppm, and can affect corrosion behavior of titanium.6,21 Campus et al. (2003) proved that concentration of fluorides in saliva after brushing with toothpaste diminishes, still lower concentrations of fluoride are still found up to 24 hours.28
A critical fluoride concentration exists above which corrosion rates increases.10
Mimura et al. (1996) reported that titanium was not considered to have a high corrosion resistance in the solution containing 500 ppm at pH =4.29
Huang et al. (2002-2003) reported that the protectiveness of TiO2 formed on titanium and titanium alloy is degraded by fluoride ions when NaF concentration exceeds 0,1 % (fluoride ion close to 500 ppm) via the formation of a Ti-F complex compound leading to severe corrosion of metal.30,31
Toniollo et al. (2012) suggested that use of 0,05 % NaF solution on titanium is safe, whereas the 0,2 % NaF solution should be carefully evaluated in regard to its daily use.7
Fluoride concentration is not the only factor affecting corrosion process. It was also shown that pH value affects negatively this process. Reclaru et al. (1998) found that titanium and titanium alloys tested undergo a corrosive process, as soon as the pH drops below 3.5.<sup32< sup=””> Nakagawa et al. (1999-2005) revealed that titanium was corroded by existence of a small amount of NaF if pH was considerably low, and that titanium was corroded even at high pH if the NaF concentration was considerably high.6,33
Toniollo et al. (2009) reported that fluoride-containing solutions (pH=7) used as mouthwashes do not damage the surface of cast pure titanium and can be used by patients with titanium-based restorations.5
Lelli et al. (2013) revealed that corrosion of titanium in the solution containing fluoride depends on the concentration of hydrofluoric acid HF. When HF was higher than 30 ppm, the passivation film of the titanium was destroyed.11 Rosalbino et al. (2012) have explained the active behavior for all the titanium alloys in fluoridated acidified saliva due to the presence of significant concentrations of HF that dissolve the spontaneous air-formed oxide film, giving rise to surface activation. However, an increase in stability of the passive oxide layer and consequently a decrease in surface activation are observed for the Ti-1M alloys (M=Ag, Au, Pd, Pt).8</sup32<>

Morphology changes in the surface of titanium were observed following fluoride corrosion.
Correa et al. (2009) reported that the process of corrosion by fluoride on commercially pure titanium allowed greater streptocoque mutans adherence than in the absence of corrosion.3 Muguruma et al. (2011) investigated miniscrew implant, they observed pits and cracks formed on implant surfaces after immersion in 0,1 or 0,2 % NaF mouth rinse solutions. However, this should not cause deterioration of their torsional performance.34
Roselino et al. (2007) concluded that prolonged contact with fluoride ions is harmful to mechanical properties of titanium structures.18
To further elucidate the role of fluoride ion concentration on the corrosion behavior of titanium and Ti-6Al-4V implant alloys, when coupled either metal/ceramic or all-ceramic superstructure, Anwar et al. (2011) examined this scenario by different electrochemical methods in artificial saliva solutions: they concluded that increased fluoride concentration leads to a decrease in the corrosion resistance of all tested couples.25

From above literature review, it is important to stress that described evidence of fluoride on titanium alloys derives mostly from in-vitro research, which includes oversimplifications in simulating oral environment.13 According to Lopez- Alias et al. (2006), it is difficult to predict the clinical behavior of any alloy from in-vitro studies, since such factors as changes in the quantity and quality of saliva, diet, oral hygiene, polishing of alloy, the amount and distribution of occlusal forces, or brushing with toothpaste can all influence corrosion to varying degrees.35
On the other hand, choice of materials to be used as suprastructures with titanium implants is crucial. Their galvanic corrosion behaviors should be evaluated in order to avoid any corrosive process.2
The concern of reducing implant corrosion might be addressed by different methods such as noble metal alloying additions, especially gold on the corrosion behavior of titanium; this could be ascribed to an incorporation of noble metal into the passive layer, resulting in increasing its dissolution resistance.8 Nakagawa et al. (2005) concluded that addition of a small amount of Pd or Pt to Ti to create an alloy proved to be very effective in improving the corrosion resistance of titanium in sodium fluoride (NaF) solutions of various concentrations up to 2 %.33 Ag and Au have excellent corrosion resistance in many aqueous solutions, and good in vivo biocompatibility.8
Zhang et al. (2009) clarified that addition of Ag was found to be effective in reducing corrosion current density and increasing the open circuit potential of titanium in artificial saliva environment.36
Shim et al. (2005) reported that Ti-Ag alloys with low Ag content (< 5 %) have better corrosion resistance than pure titanium in artificial saliva.37
Yamazoe et al. (2007) showed that Ti-0,5 Pt, Ti-6 Al- 4N -0,5 Pt, and Ti-6Al-7Nb-0,5 Pt alloys had high corrosion resistance in a fluoride containing environment and high mechanical strength. Therefore, use fullness of these alloys as new implants or denture base materials was suggested.38
Design and texture of implant surface was also studied. The presence of pores in implant materials may be a source of corrosion problems. Foit and Joska (2013) showed that titanium implants with porosity of 24 and 33% initiated a local attack of the material.39
Moreover, the abnormal electrical currents produced during corrosion can convert any metallic implant into an electrode, and the negative impact on the surrounding tissues due to these extreme signals could be an additional cause of poor performance and rejection of implants.
Electrical protection of the surfaces of the implants was proposed by Gittens et al. (2011) in order to reduce implant corrosion.15
On the other hand, innovative commercial mouthwashes and toothpastes during the last decade have replaced fluoride with biomimetic hydroxyapatite nanocrystals (CHA) as a remineralizing agent to avoid the effects of fluoride on human health.11

The most favorable suprastructure/implant couple is the one capable of resisting the most extreme conditions that could possibly be encountered in oral cavity. Most studies were conducted in-vitro. Results showed that fluoride–containing products should be controlled and prescribed carefully, since increasing the use of such products can lead to alterations of implants and restoration surfaces, compromising the longevity of the treatment. In fact, fluoride ions seem to exert a negative influence on the corrosion resistance of pure titanium and titanium alloy Ti-6Al-4V, especially in the acidic artificial saliva which contained over 0,1% NaF (fluoride ions = 500 ppm). This may cause the breakdown of protective passivation layer that normally exists on titanium and titanium alloys, leading to severe corrosion.20,29,30,31
However, further in-vivo studies are warranted in order to elucidate corrosion resistance of titanium and titanium alloys exposed to fluoride agents in oral cavity.