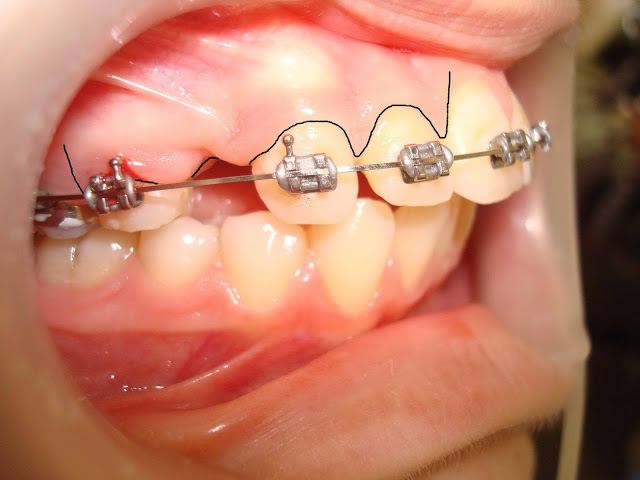 30 patients, aged 15 to 24 years, with a mean age (20,04±3,63) years were used in this study. Extraction of the maxillary first premolars. On One side, the corticotomy was performed. The canines were distalized with nickel-titanium coil springs on both sides. Corticotomies were performed on the cortical bone of the maxillary first premolars region in 30 patients (10 male and 20 female). The canines on the experimental side and on the sham side were moved distally with a continuous force of 120g.

Tooth movement velocities after the corticotomies were significantly faster on the experimental side than on the sham side.

Orthodontic tooth movement increased after the corticotomies. This might be brought about by rapid alveolar bone reaction in the bone marrow cavities, which leads to less hyalinization of the periodontal ligament on the alveolar wall. suggested that the acceleration of tooth movement associated with corticotomy is due to increased bone turnover and based on a regional acceleratory phenomenon.

Canine Distalization for extraction cases usually takes 6 to 9 months, contributing to an overall treatment time of 1.5 to 2 years. The duration of orthodontic treatment is one of the issues patients complain about most, especially adult patients. That is why many patients refuse orthodontic treatment. The incidences of caries and periodontal disease also increase when treatment is prolonged.1 To shorten the time for orthodontic tooth movement, various attempts have been made. These attempts fall into 3 categories. The first is local or systemic administration of medicines such as prostaglandins, interleukins, leukotrienes, cyclic adenosine monophosphate, and vitamin D.2-5 The second category is mechanical or physical stimulation such as direct electrical current 6 or a samarium-cobalt magnet.7 The last category is oral surgery, including gingival fiberotomy,8 alveolar surgery, and distraction osteogenesis. distraction osteogenesis is a process of growing new bone by mechanical stretching of the pre-existing bone tissue. In 1998, Liou and Huang demonstrated the rapid canine retraction technique involving distraction of the PDL (PDLD) aided by alveolar surgery undermining the interseptal bone. after extraction of the first premolars.9 Iseri et al and Kisnisci et al described and clinically used a new technique for rapid retraction of the canines, the DAD.10

However, tooth movement after a corticotomy should be considered a combination of the classical orthodontic tooth movement and the movement of bone blocks containing a tooth, because the force applied on a tooth is transmitted into the osteotomy gap through the periodontal ligament (PDL).

Bone turnover is well known to be accelerated after bone fracture, osteotomy, or bone grafting.19 This could be explained by a regional acceleratory phenomenon (RAP); ie, osteoclasts and osteoblasts increase by local multicellular mediator mechanisms containing precursors, supporting cells, blood capillaries, and lymph. 20
Similarly, bone turnover is increased by RAP after a corticotomy.

A clinical prospective study was performed to evaluate the effects of corticotomy in 30 patients (10 male and 20 female) with a mean age (20,04±3,63) years.
After conviction there is indication for retraction upper canine after extraction first upper premolars.

The patients were informed of the risks, advantages, and disadvantages of the experiment and they decided to undergo orthodontic treatment after corticotomy and signed a consent form.

All patients were treated with preadjusted Straight Wire fixed appliances, with a 0.0220 × 0.0280 slot brackets (Roth, American orthodontics) were used and TPA (transpalatal arch) was soldered to the first upper molars bands.

The maxillary left and right canines were chosen to be the experimental and sham sides with one of the random methods.

The maxillary first premolars were extracted on both sides to prepare the space for distal movement of the canines.

Healing, by the formation and mineralization of callus, usually requires 4 to 16 weeks after bone injury.19 Therefore, at 12 weeks after extraction, the alveolar bone on the experimental side was corticotomized as follows: the gingival mucoperiosteal flaps were raised to expose cortical bone on both the buccal and the lingual sides of the canine (Fig 1 and 2). 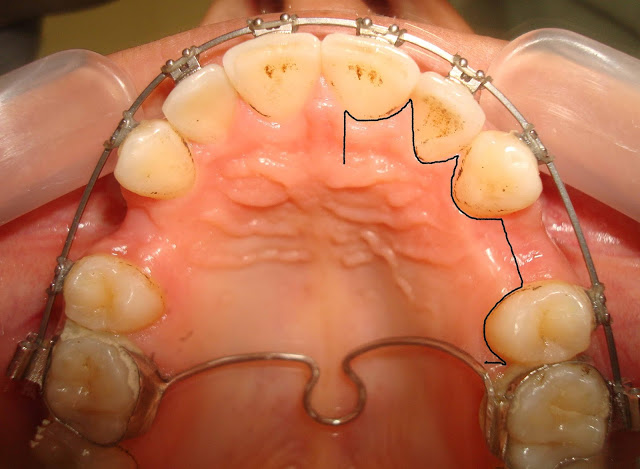 Fig 1. Schematic drawing of incision on palatal side.

Fig 2. Schematic drawing of incision on buccal side.

The horizontal cut line of the corticotomy was made above the apices of the canine 2-3 mm on the buccal side and at the level of palatal groove on the palatal side. The vertical cut lines were made 1-2 mm apical to the alveolar crests of the canine to the horizontal cut lines on the buccal and lingual sides. Small corticotomy perforations were drilled in the buccal and palatal cortical bone. There were about 20 perforations according to the alveolar process area in each patient.

These perforations were made to obtain additional bleeding points. (Fig 3 and 4). The corticotomy process was performed with a fissure bur (width 2 mm), The corticotomy cuts and perforations were made with a round bur (diameter 2 mm), under saline-solution irrigation. The width of bone cuts was approximately 2 mm, and the depth was carefully adjusted to reach the bone marrow by confirming bleeding through the cut lines. The mucoperiosteal flaps were sutured with absorbable surgical sutures.

Immediately after the corticotomies, the canines of the experimental and sham sides were moved distally along the orthodontic wire with a continuous force of 120 g by using nickel-titanium closed coil springs. The canines were retracted using closed Sentalloy coil springs (American orthodontics) on 0.0190 × 0.0250 stainless steel arch wires. 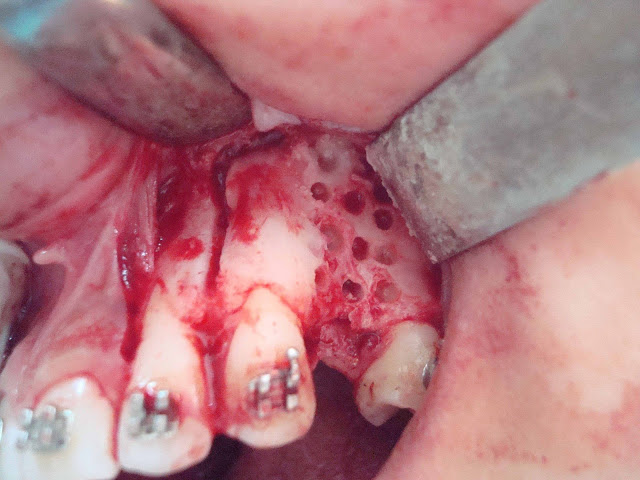 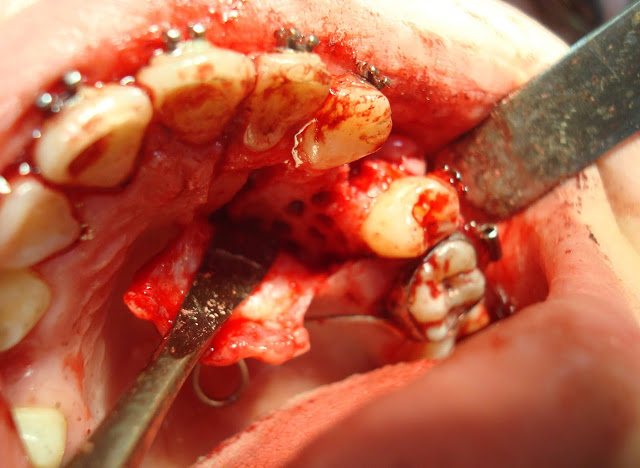 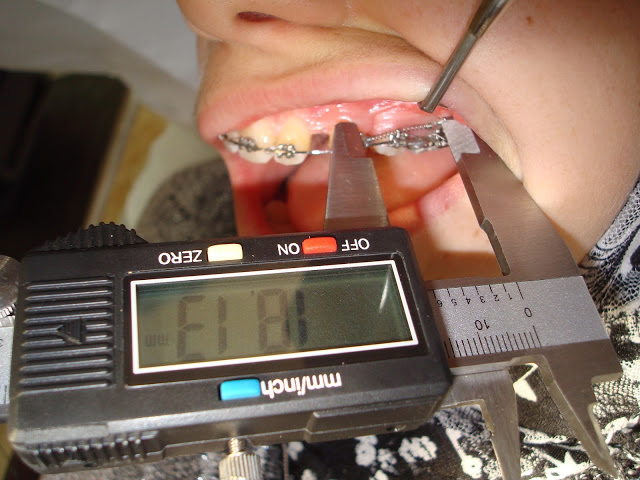 Fig 5. Measurement of the distance between canine bracket and first molar hooks with the Boley gauge.

The questionnaire showed: (1) the corticotomy has a high levels of pain, swelling and discomfort for the first week only. (2) no significant differences were detected between males and females with regarding pain and discomfort. (3) the degree of discomfort at activating the retracting spring was significantly greater on the sham side than that on the experimental side.

This study was undertaken to investigate the influence of corticotomy on tooth movement between the CF and the Standard orthodontic techniques. Our results showed that the CF technique significantly accelerated tooth movement. The rate of tooth movement in the CF group was 2-4 times of that in the S group.

In this study, Tooth movement began immediately after corticotomy. On the other hand, Iino et al24 used both labial and lingual corticotomy cuts near the moving premolar. The acceleration of tooth movement in this study was similar to that reported by Ren et al,25 who used a surgical technique that depended on undermining the interseptal bone in a premolar-extraction canine experiment.

The anchorage loss was not measured in this study We focused on the influence of corticotomy on tooth movement.

No significant differences were detected between males and females regarding pain and discomfort. This result agrees with this of Ngan et al. 26

This study shows that the alveolar corticotomy procedure increases orthodontic tooth movement with accepted degrees of pain and discomfort. 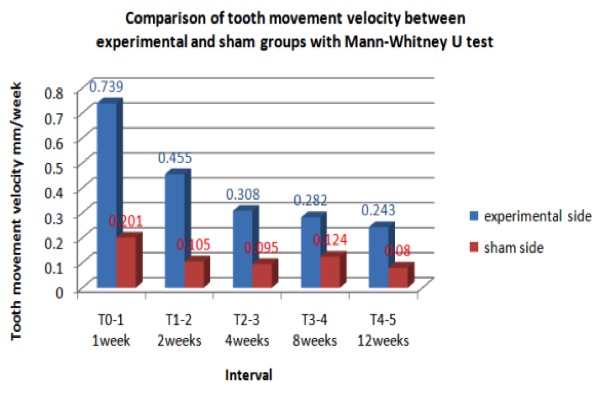 Fig 6. Comparison of tooth movement velocity between experimental and sham groups with Mann-Whitney U test. 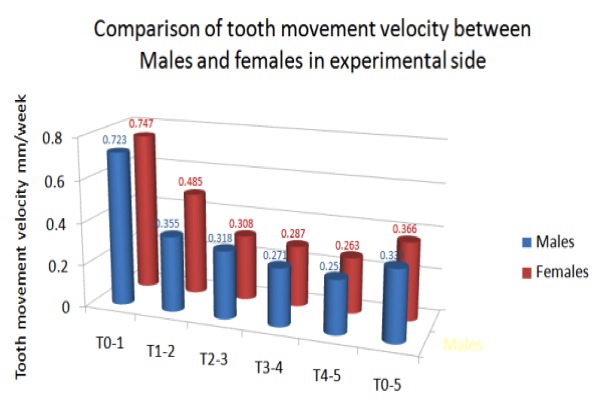 Fig 7. Comparison of tooth movement velocity between males and females groups in experimental side.

2. Lee W. Experimental study of the effect of prostaglandin administration on tooth movement with particular emphasis on the relationship to the method of PGEI administration. Am J Orthod Dentofacial Orthop 1990;98:231-41.

5. Collins MK, Sinclair PM. The local use of vitamin D to increase the rate of orthodontic tooth movement. Am J Orthod Dentofacial Orthop 1998;94:278-84.