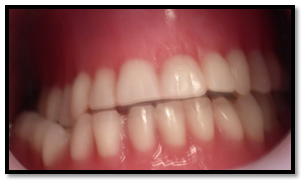 Oral rehabilitation with conventional complete dentures on a patient with Bardet-Biedl syndrome: A case report

Bardet-Biedl is  a very rare syndrom ; its diagnosis needs the collaboration of multidisciplinary intervenants. We aimed to report a patient  with this pathology not only to restore oral functions but also helps practitioners to offer better solutions to overcome difficulties in such situations.

For the diagnosis, 4 primary or 3 primary and 2 secondary criteria are required.

The diagnosis is mainly clinical and currently the genes responsible for cilia biogenesis and function are being investigated.

The etiology is still unknown, but it is described in the literature as 35% to 48% of parental consanguinity in patients with this syndrome.

Patients also present buccodental anomalies such as malocclusion, anterior crowding, micrognathia, deep palate, hypodontia, small tooth roots, enamel hypoplasia, and microdontia. Because of the oral manifestations, dentists must get acquainted with this syndrome 2, 3, 14.

A 53-year-old male patient consulted our department requesting new dentures conception; his complaints are mainly about aesthetic appearance and instability of his dentures, so he wanted to beneficiate of a new conception that would allow him a better faculty of chewing. (fig 1 A, B, C) 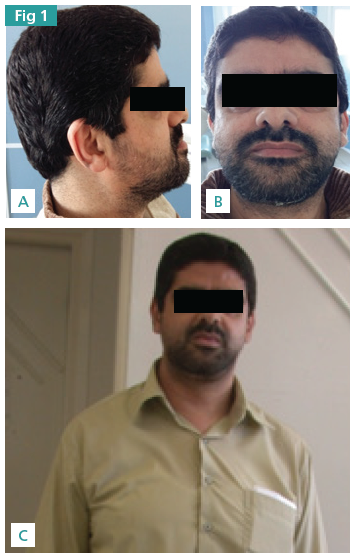 The general medical examination revealed a reduction of the eyesight; infertility through a detailed questioning of the patient; who adds that his sister  is also  suffering from the same syndrome and she is not married; then when we asked him if it is possible to bring her at an appointment; since she is a complete- denture- wearer also, he said that she is blind and it’s more difficult for her to get around 3, 5, 14, 17.

The particularity of this syndrome in relation with oral rehabilitation is that the patient suffers from recurrent odontogenic cysts and its  surgical resection is not only recurrent but also it causes bone resorption which is further added to physiological one where it’s centrifugal in the maxilla and centripetal in the mandible.

Intra-oral examination shows a reduced size of both mandible and maxillary arch (figure 2 .a.b) and alveolar bone height with knife-edge shape, which may complicate the denture construction and its biomechanical behavior during function.

The examination of old dentures shows a notable decrease of the occlusal vertical dimension (O.V.D); lack of retention and stability; what explains his aesthetic grievances (fig.3 a.b)

So it seems logic that the decision is to resume a new prosthetic conception instead of rebasing or relining old ones, in any case it’s not the indication.

The technique to idealize new complete dentures followed the same steps that are recommended as usual: A preliminary impression was made using stock edentulous tray (Schranemakers), then the final impression was taken with a custom tray fabricated with autopolymerized acrylic resin with border-moulded impression compound followed by a regular impression.

Master casts were mounted on a semi adjustable articulator with a common arbitrary ear-face-bow instrument, using condylar guidance of 30°, Bennett angle of 15°.

Centric occlusion was established according to dynamic records based on unforced movements of the jaws in the terminal hinge position performed by the patients and manually guided. 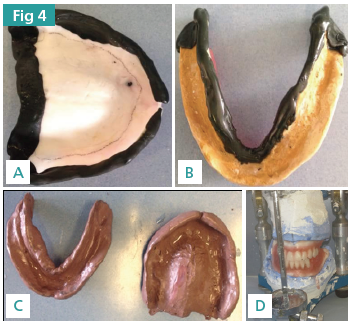 The artificial teeth were arranged in wax. The patient and his wife accepted the arrangement of teeth which have the particularity to be done in cross-over in the right side to remedy to the resorption between maxilla and mandible. (Fig 5 A, B)

The dentures were waxed, processed, finished, and polished. The patient and his wife were recommended about its use, cleaning procedures, and the importance of followup, especially if there were some complaints or any discomfort.

To complete necessary adjustments, follow-up appointments were scheduled the next day and one week later. Future follow-up was also planned to evaluate progress in speech and esthetics.

The problem is that pain still present in the area of the cyst in the left side of the mandibular arch; relining will probably be the best alternative to reduce this pain.

Alstrom syndrome is characterized by tapetoretinal degeneration, obesity, preaxial polydactyly, diabetes mellitus, and neurogenic deafness. The patient had only one (obesity) of these manifestations. His blood glucose was normal and he had no symptoms of diabetes. Neither did he have neurogenic deafness 6, 8.

Obesity, genital dystrophy, nerve deafness, and short stature characterize Weiss syndrome, which were all seen in the patient. But the patient had

retinal dystrophy, which is not characteristic of this syndrome.

The patient, however, had no spastic paraparesis and patients with Laurence Moon syndrome do not show polydactyly and obesity  7, 8, 12.

Similar to Laurence Moon syndrome, Bardet-Biedl syndrome is characterized by retinitis pigmentosa, obesity, postaxial polydactyly, learning disabilities, hypogenitalism, and in some cases, renal dysfunction. With 4 of the 6 characteristics present in this patient, he was diagnosed to have Bardet-Biedl syndrome.

Decreased visual acuity can result from macular involvement of the disease 4, 7, 8.

As there is no specific curative therapy available for this syndrome. The patient was managed symptomatically and a new complete denture was managed.

The patient was seen for some complaints at twice a time: First for aesthetic ones where some corrections were done; then for difficulties of chewing since prosthetic teeth were arranged on a cross way; so we decided to resume a new lower complete denture to find a better arrangement  for occlusion and better stability of  the complete dentures .

An effective multidisciplinary approach is required to manage this pleiotropic situation. There is no definitive treatment method for BBS. Complications related to BBS should be treated symptomatically.There should be an awareness of complications for which BBS has laid the base and patients should be followed up in this respect 9, 10, 11.

Clinical and genetic characterization of Bardet-Biedl syndrome in Tunisia: defining a strategy for molecular diagnosis.

Exome sequencing identifies a novel and a recurrent BBS1 mutation in Pakistani families with Bardet-Biedl syndrome.

Bardet-Biedl Syndrome, Crohn Disease, Primary Sclerosing Cholangitis, and Autoantibody Positive Thyroiditis: A Case Report and A Review of a Cohort of BBS Patients.

Characterization of CCDC28B reveals its role in ciliogenesis and provides insight to understand its modifier effect on Bardet-Biedl syndrome. Hum Genet 2013;132:91-105.