FKG: A Paradigm Shift in Endodontics 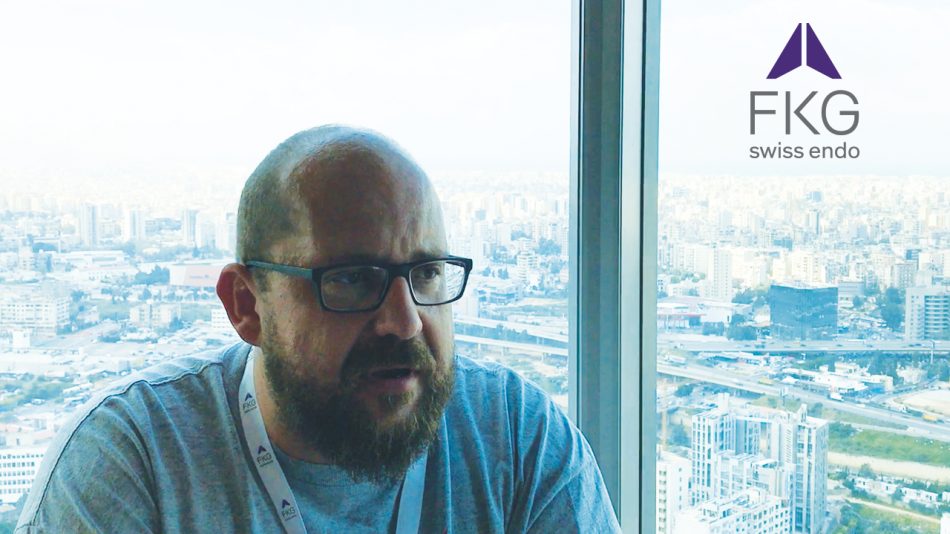 Dr. Oscar Von Staten talking about a paradigm shift in Endodontics during the congress held by the Lebanese Society of Endodontics.

DN: Dr. Oscar Von Staten, welcome to lebanon for the Lebanese Society of Endodontics. We heard there is something new in Endodontics. Can you tell us what are you going to talk about?

Dr. Von Staten: I’m talking on presenting a new idea from FKG: the XP Endo Shaper film. It’s called the “snake file” because it really behaves like a snake during the instrumentation, and i was very sceptical about it.
Because i was thinking: “another instrument? we don’t need it”;
On a block of Microvisianidae was a count of 151 different instrumentation systems on the market, (it’s overwhelming.)
So i tried it out and was convinced for easy cases like premolars, upper front teeth for example not for molars, not yet. (I did some with them.) But the idea behind this was extremely fascinating because there was one study running in Rio De Janeiro in Brasil, made by Gustavo De-Deus, and he showed that this file is capable to touch 70% of the canal walls during one minute of action and the most interesting fact in the study was that they took the Isthmus which is a non-preparated area into the calculations of it. So if you take the Isthmus Area of the lower molars out of this calculation it will reach about 90% of surface contact of the canal wall and this is what we want to have because we want to remove the biofilm; To remove the biofilm we need mechanical action.
And we know that ultrasonic/sonic agitation, manual dynamic activation… Whatever you want to take inside, it’s not perfectly working in an epical third. And this is we should care the most about it, so the XP Shaper for me is really a Paradigmal Shift. For sure there will be more studies coming out and now are doing some preparations to reinforce this concept and the real success of this file.

DN: These are good news for dentistry and Endodontics. Thank you very much.