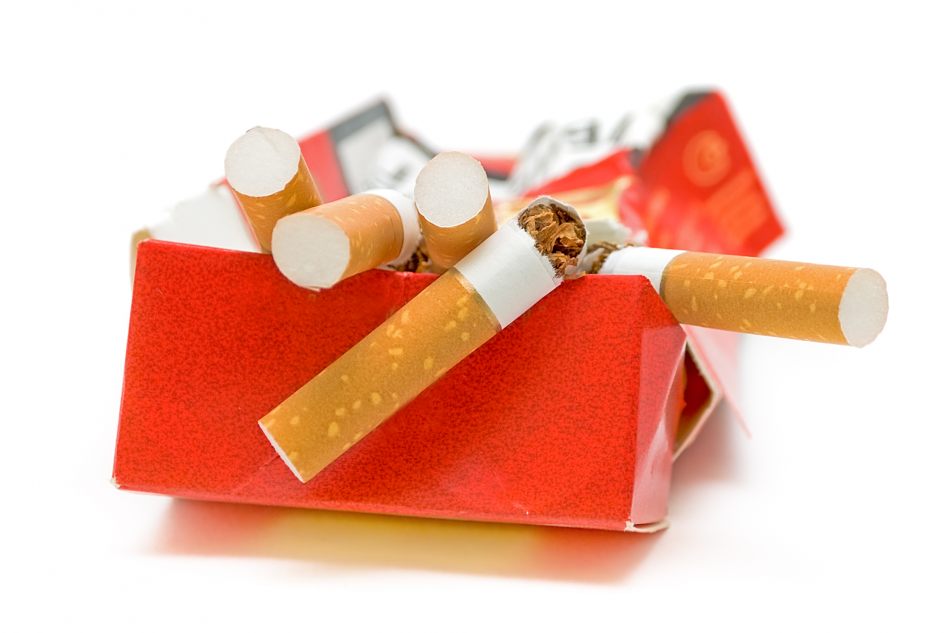 Background
Clinical trials show the efficacy of dentists’ counseling in smoking cessation. However, little is known about the effectiveness of such advice in the general population of smokers.

Objective
To examine the association between dentists’ advice, use of cessation medications and quitting behaviours in the general population of adult smokers in Ontario, Canada.

Methods
Data were from the Ontario Tobacco Survey panel study, which followed people who were smokers in July 2005 semi-annually for up to 3 years until June 2011. Baseline smokers, who were seen by a dentist during the study, were included in the analysis (n = 2714 with 7549 observations). Logistic regression analysis with generalized estimating equations was used to examine associations among dentists’ advice, use of cessation medications and quitting outcomes (quit attempts and short-term quitting ≥ 30 days).

Conclusion:
Dentists play an important role in smoking cessation, because they can encourage patients to stop smoking and promote success by advising patients to use cessation medications.

The health consequences and economic cost of tobacco use are extensive.1 By helping their patients quit smoking, health professionals play a key role in enhancing their health and well-being, and clinical guidelines have been developed to facilitate evidence-based clinical care in smoking cessation.2,3 The dental team, in particular, is fundamental to cessation. Because tobacco use has a significant impact on oral health (smokers have a greater risk of oral cancers, periodontitis and other oral diseases), dental professionals are uniquely qualified to conduct smoking-cessation interventions.4 Smoking is a risk factor for the destruction of hard and soft tissue around natural teeth.1 Smoking affects inflammation, promotes the growth of periodontal pathogens and reduces gingival blood flow.1 Dentists, dental hygienists and other professionals have been on the front lines of tobacco control for many decades, and most dental practitioners have long believed that counseling is an important part of their practice.5

Dating from 2001, the Canadian Dental Association’s official position is that it encourages “the eradication of the use of tobacco products. Studies indicate that dental counselling is effective in influencing patients to quit using tobacco. The Canadian Dental Association urges dentists to inquire about their patients’ tobacco use and provide advice and encouragement to those interested in quitting.”7

In 2012, the Ontario Tobacco Research Unit conducted a survey of 1966 dental health professionals in Ontario.8 It found that dental professionals, particularly dental hygienists, were enthusiastic about smoking cessation, and over 50% reported providing services of some sort at least some of the time, including advice to quit and warning of the dangers of smoking. Nevertheless, substantial barriers to providing smoking cessation services remain. Only 21% of respondents had received formal training in providing such services, and 29% were not at all confident in their knowledge and skills in this area. Lack of interest by patients and fear of alienation of patients are regarded as key barriers.8

Although the efficacy of smoking cessation advice from dental professionals in clinical settings is well known, information about its effectiveness in the general population of smokers in Ontario and Canada is limited. In this study, we examine the characteristics of smokers who received smoking cessation advice from dentists and the impact of that advice in a representative cohort of Ontario adult smokers.

We used data from the Ontario Tobacco Survey (OTS). The OTS longitudinal panel is a population-based telephone survey of Ontario adult smokers (≥ 18 years of age) who were recruited and followed every 6 months for up to 3 years (maximum of 7 interviews: baseline and 6 follow-up interviews) between 2005 and 2011.9

Dentists’ advice was measured as a positive response to the survey question “Did the dentist advise you to quit or reduce smoking” among those who reported that they had seen a dentist in the past 6 months. Use of cessation medications was measured as a positive response to the survey question “In the past 6 months, did you use… to help you quit or reduce smoking, or stay smoke free?” This question was asked for each form of nicotine replacement therapy (NRT), including nicotine gum, patches, inhaler, nasal spray and lozenges, as well as bupropion and varenicline. The outcome of 1 or more quit attempts was measured as a report “trying to quit smoking completely” by a respondent during the follow-up period. Short-term quitting was measured as self-reported “not smoking for at least 1 month” at any follow-up interview.

We conducted bivariate analyses using either a X2 test for categorical variables or a t test for continuous variables to examine the relation between sociodemographic characteristics or smoking-related variables and dentists’ advice. Each eligible smoker contributed 1 data point, i.e., if a smoker was given advice 3 times during the 3-year follow up, he or she was included in the “receiving advice” group as 1 record; those who were seen by a dentist but never received advice were classified as “not receiving advice.”

To examine the association among dentists’ advice, cessation medications and quitting outcomes, while controlling for confounding factors, we used logistic regression through generalized estimating equations (GEEs) with exchangeable correlation matrix, which take into account correlated error terms for repeated measures within individuals. Odds ratios and 95% confidence intervals were reported. All analyses were conducted using SAS v.9.3, and all p values were 2-sided. 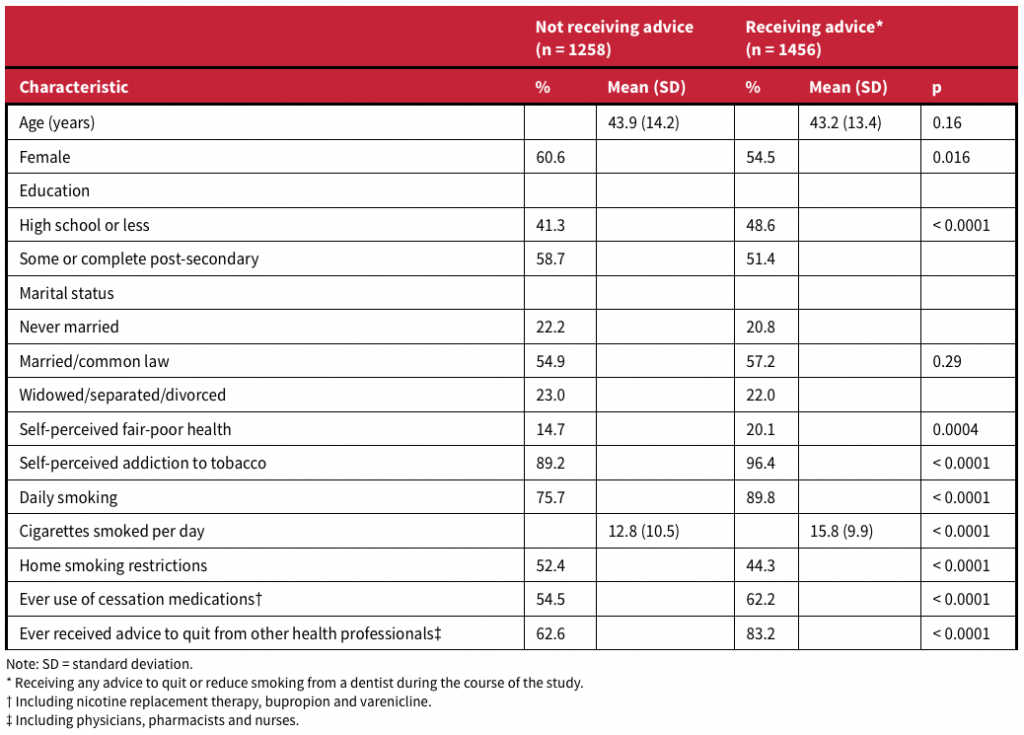 Table 1: Differences in baseline characteristics of smokers receiving and not receiving dentists’ advice to quit smoking during follow up, according to the Ontario Tobacco Survey, 2005–2011.

Smokers who received advice were more likely to be male, less educated and in poorer health; to have a higher perceived addiction to tobacco; to smoke daily and more cigarettes per day; to use cessation medications; and to receive advice to quit from other health professionals, but less likely to have home smoking restrictions, compared with those who did not receive advice (Table 1). Thus, smokers who received advice were more addicted to tobacco than those who did not receive advice. In Table 1, each smoker only contributed one data point.

Rates of quit attempts and short-term quitting were higher among those who did not receive dentists’ advice, compared with those who did (Table 2, Model 1). 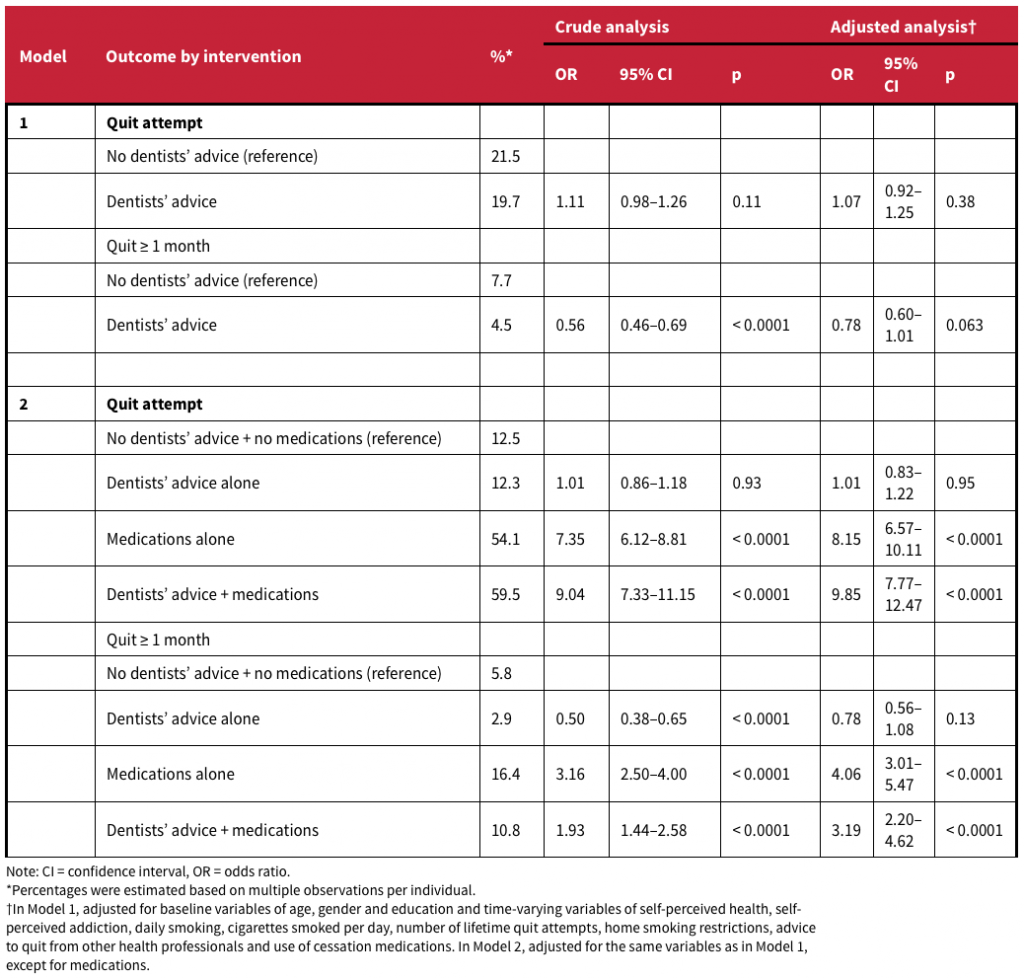 Table 2: The association between dentists’ advice, use of cessation medications and quitting smoking, based on the Ontario Tobacco Survey, 2005–2011.

In the general population of Ontario, a substantial number of smokers (nearly 54%) received advice to quit or reduce smoking from a dentist. This suggests that dental advice is a key component of the smoking cessation system. In this study, we found that dentists’ advice, when given in conjunction with smoking cessation medications, was effective in encouraging quit attempts and promoting successful smoking cessation.

The efficacy of smoking cessation services provided by dental health professionals is well established in the literature. Randomized controlled trials indicate that routine smoking cessation counseling by dental health professionals has resulted in twice as many patients successfully quitting smoking cigarettes compared with control groups (16.9% vs. 7.7%10 and 13.3% vs. 5.3%11). Most trials in dental settings report a quit rate comparable to that achieved by physicians.6

However, in this representative population of smokers, those who did not use smoking cessation medications did not appear to be helped by receiving dentists’ advice alone. Given the consistent findings of the efficacy of smoking cessation, this is likely primarily a reflection of the substantial differences between smokers who received advice and those who did not. Those who received dentists’ advice were more likely to be male, less educated, in poorer health and more addicted to tobacco smoking, i.e., Ontario dentists are providing advice to people who are more affected by their tobacco use. Thus, these patients will receive the greatest benefit from quitting smoking, but they are also the most challenging group to treat.

Although many variables, including those related to tobacco addiction (such as daily smoking, number of cigarettes smoked per day and self-perceived addiction) were controlled for, unmeasured or unmeasurable variables (e.g., mental health issues and genetic differences) might contribute to the null association between receiving dentists’ advice and quitting outcomes in our study.

Our results have 2 major implications for practice. First, dentists should ensure that their advice reaches a broader audience, including patients who are lighter smokers, less addicted or have not yet fully developed nicotine dependence. Dental advice has been shown in clinical studies to be just as effective in this population, and this will help increase the absolute number of quit attempts driven by dental professional advice.

Second, to the extent appropriate, advice or information about health effects should be given in conjunction with evidence-based treatments that increase the likelihood of successful smoking cessation for patients. These treatments include pharmaceutical aids, such as nicotine patch and gum, buproprion and varenicline. Without dentists’ advice, some smokers in this study would not have used cessation medications or would not have used medications appropriately to achieve the optimal outcome.
Studies have shown that most smokers in the general population do not use cessation medications when trying to quit, and, those who use them, do so for less than the recommended period.12,13 Dentists should provide quit advice to their smoking patients and encourage these patients to use cessation medications as recommended for success.

The Canadian Smoking Cessation Clinical Practice Guideline should be used to ensure that evidence-based practices are adopted and implemented by dentists across Ontario.3

1.The health consequences of smoking — 50 years of progress: a report of the Surgeon General. Rockville, Md: United States Department of Health and Human Services; 2014.. Accessed April 25, 2016.