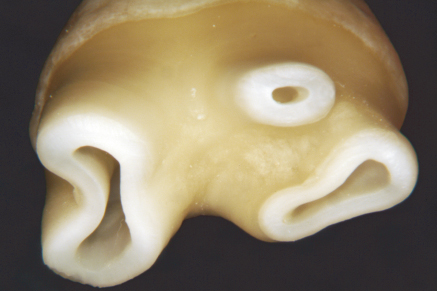 The knowledge of root canal anatomy plays a major role on the influence of the outcome of endodontic treatment. A thorough biomechanical cleaning and shaping of the root canal system, followed by hermetic seal of entire root canal space should be achieved for successful treatment. However, unexpected complex canal anatomy presents clinical challenges and difficulties that might jeopardized the main goal of such therapy. 1 Therefore, clinician should recognize the variations in the root canal systems and its characteristic features in different races when performing endodontic treatment. The mandibular first molars erupt at the age of 6–7 years and apical closure is usually completed by 8–9 years. The completion of canal differentiation commences about 3–6 years after root completion. 2 Any disturbances in this differentiation can result in variations in canal anatomy.

A 48-year-old Saudi female was complaining from pain with cold and biting about 3 weeks ago on the right mandibular first molar (#46). She went to primary health care center where root canal treatment was initiated for the tooth then referred to Hail Dental Center, Hail, Saudi Arabia to continue the treatment. The patient is a hypothyroidism “controlled” and according to American Society of Anesthesiologists (ASA) classification, she is class ASA II. 7 The patient chief complaint was “I have pain with biting on lower right side.” Clinical examination revealed no extra or intraoral soft tissue abnormalities; the probing depth was within normal measures, and the affected tooth has responded to percussion test. Preoperative radiographs revealed widening of the periodontal ligament of the distal root [Figure 1a]. The case was diagnosed as previously initiated and symptomatic apical periodontitis.

The tooth was isolated with rubber dam, and after proper deroofing, the pulp chamber, a C-shaped canal configuration with 4 orifices was noticed [Figure 1b]. Working length was determined, and the radiograph shows two distal canals, distobuccal (DB) and distolingual (DL), were joined at apical third. The mesial canals, mesiobuccal (MB) and mesiolingual (ML) were separate.

Apex locater (Root ZX II J. Morita, Tokyo, Japan) was used to check the working length of the MB canal. It gives reading at a level close to that of ML canal which indicates that the file is inside the canal, but there was catch at the middle third with file. The decision was taken to finish the root canal treatment except the MB canal which was kept for another visit for further investigations.

All canals were cleaned and shaped using ProFile. 04 Files Rotary System (Dentsply, Maillefer, Ballaigues, Switzerland) up to size 45 for MB canal, 50 for ML and 55 for DB and DL canals. K-files passively introduced into the canal, and filing directed towards the isthmus areas to obtain better debridement in clinical practice. Sodium hypochlorite (5.25%) was used in a larger quantity, alternately with passive ultrasonic activation (Irrisafe tips, Acteon, Merignac, France). This helped to remove tissues from the narrow canal isthmus. The master cone was checked, and obturation was completed with careful warm vertical compaction of gutta-percha (GP) and AH-Plus sealer (Dentsply Maillefer, Ballaigues, Switzerland).

In the second visit, a decision was taken to view the area with cone-beam computed tomography (CBCT). GP was placed inside the MB canal before taking CBCT to evaluate the path of canal. The GP was cut, and the coronal access was filled with temporary filling then CBCT was taken.

There was deviation toward the furcation in axial view which may suggest strip perforation also because the danger zone in C-shaped root canal configuration is very thin and could be easily perforated [Figure 2]. Final decision was taken to fill the whole MB canal with mineral trioxide aggregate (ProRoot MTA, Dentsply Tulsa Dental, Tulsa, OK, USA) to assure proper sealing of the MB canal [Figure 3].

• Category I (C1): The shape was an interrupted “C” with no separation or division

• Category II (C2): The canal shape resembled a semicolon resulting from a discontinuation of the “C” outline

• Category IV (C4): Only one round or oval canal in that cross‑section

• Category V (C5): No canal lumen could be observed (which is usually seen near the apex only).

In present case report, the tooth does not belong to any of the previously mentioned classifications. It has 4 orifices, two separate mesial canals, and two joined distal canals. The incidence of C-shaped mandibular second molar in Saudi Arabian population was 10.6% where eight cases were classified as having Category III, with Subdivision I, II, and III. 10 According to the classification of Al-Fouzan, 10 the mesial root fall into Category III Subdivision III “C-shaped orifice that divided into two or more discrete and separate canals in the coronal third to the apex.” The distal root falls in Type II of Manning 8 classification “a Type 2 canal system has two canals that combine and exit as one at the apex.” In general, the majority of permanent mandibular first molars of Saudi population (57.76%) typically present with two well-defined roots, mesial and a distal root with two canals in each root. 15 C-shaped of mandibular first molar has not been reported in Saudi.

The working length radiographs that were taken during negotiating the root-canal show the file in the furcation area as if it is perforating it. This confusion was reported by Melton et al. 9 and Chai and Thong. 16 The present case was checked with CBCT to role out root perforation. The CBCT provides comprehensive information about the root canal from different directions that could not be detected using conventional radiographs or clinical techniques. 17, 18 CBCT technology uses isotropic voxels, which are equal dimensions in all three planes of space, enabling accurate linear geometric and three-dimensional measurements of the data acquired. 19, 20

Sabala et al., 21 have stated that the rarer the aberration is, the greater the probability of C-shaped being bilateral. In this case, the contralateral mandibular first molar was different and did not show a C-shaped root canal configuration in CBCT [Figure 5].

C-shaped canals are difficult to clean and fill due to high percentage of canal irregularities 8, 22 Therefore and to successfully treat a C-shaped canal, the canals should be located and negotiated carefully then the biomechanical debridement of the pulp tissue should be carried out. 23

Care should be taken during cleaning and shaping to avoid perforating the thinner lingual walls of C-shaped canals. The anticurvature filing technique proposed by Abou-Rass et al. have been recommended to avoid danger zones that are frequently present at ML walls. 24

In addition, using rotary instruments to clean the C-shaped canal system assisted by ultrasonic irrigation was recommended due to large area of canal space that is difficult to touch using endodontic instruments alone. 25, 26 This was followed in the present case.

Filling of a C-shaped canal is another problem. Using a cold lateral condensation technique might leave unfilled spaces due to the various canal intricacies that jeopardized the outcome of the treatment. To assure good filling, the thermoplasticized GP technique may prove to be more beneficial. 27 The canals of the present case were carefully filled with warm vertical compaction of GP. Light force was used during compaction to avoid root fracture due to thin remaining dentin thickness as a result of canal instrumentation. 12, 28

The MB canal of the current case was filled with MTA to assure proper sealing of the canal.{Weine, 1998 #21}. The use of MTA to fill the root canals has been recommended in different complicated clinical cases because of its superior physiochemical and bioactive properties when compacted against dentin. 29,30

This case report presents the uncommon C-shaped anatomy of mandibular first molar. Careful inspection of the tooth, the use of CBCT and the correct choice of cleaning, shaping and obturation techniques suitable for such case helps achieve good outcome.