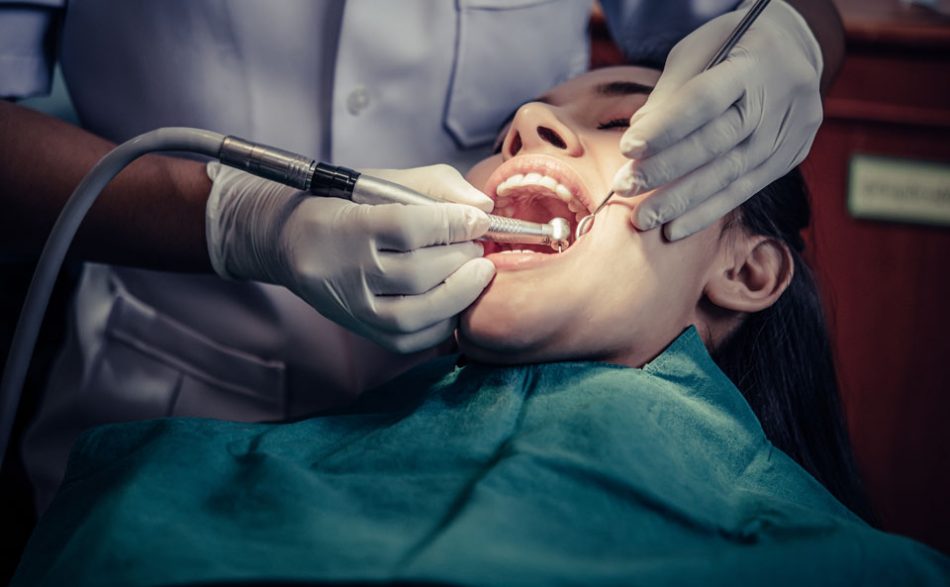 This case report demonstrates 3-dimensional restoration of a severely damaged alveolar ridge. Prior extraction, surgical trauma and infection resulted in total loss of facial and palatal cortices in an esthetically critical area of the dentition. The compromised restorative and endodontic status of the adjacent canine precluded a conventional fixed bridge. Cytokine-enhanced stimulation of mesenchymal stem cells, combined with a resorbable rigid scaffold reconstructed the alveolar ridge, facilitating implant placement. Additional grafting at implant placement provided the restorative dentist with two osseointegrated fixtures. The residual soft tissue deficiency was compensated for with ceramics combined with CAD/CAM technology to provide an esthetic fixed restoration.

Tooth loss will predictably result in 3-dimentional loss of hard and soft tissue volume.1,2  Not only does this complicate the placement of implants according to the restorative treatment plan, but long-term hygienic complications can result from less than ideal fixture positioning. When possible, many clinicians choose to place implants either at the  time of extraction or shortly thereafter, attempting to minimize these complications.3 The literature contains numerous studies, case series  and animal studies supporting this modality.4,5 Often, extraction sockets are augmented to prevent much of this localized atrophy.6,7 When teeth are previously removed, these opportunities for earlier placement are lost, and often  favorable hard and soft tissue volume has been lost as well. Reconstructive procedures exist to restore lost bone and soft tissue, providing the surgeon with an opportunity to place implants in restorable positions.8,9 Procedures including autogenous, allogeneic or xenogeneic block grafts, guided bone regeneration (GBR) with and without particulate bone grafts, rigid meshes and biologic mediators such as PRP, recombinant proteins, etc. have been presented by surgeons.10,11 All of these modalities have the potential to regenerate alveolar bone capable of osseointegration.  A complication rarely reported in the literature, is what occurs when one of the above-mentioned procedures completely fails, and the resultant defect is more severe than the original one being treated. This case report describes the treatment of a 45 year-old female, who unsuccessfully underwent a regenerative procedure, which became infected and led to the loss of significant alveolar bone and an additional tooth.

A 45-year-old female patient, with a history of smoking, presented to a private periodontal practice after experiencing an unsuccessful ridge-augmentation procedure at a university periodontal clinic. Originally, tooth #7 was surgically extracted and the socket was augmented. This procedure was not successful due to soft tissue complications and possibly smoking. She subsequently underwent a surgical procedure involving the use of a titanium mesh, combined with a bone allograft hydrated with rhPDGF-BB. Early exposure of the mesh and local site infection resulted in the removal of the mesh and debridement of non-incorporated bone graft materials. This resulted in a significant ridge defect (Fig. 1). One of the titanium fixation tacks was left in place at this time.  The patient was provisionalized from tooth #6 through #11 with a fixed restoration. Her general dentist determined tooth #8 to be non restorable due to caries. She was referred to a private periodontal office for extraction of the carious central incisor and ridge-augmentation in the #7 and #8 locations. Previous endodontic therapy and guarded crown-to-root ratio of #6 was determined to be a questionable distal bridge abutment for a long-span fixed partial denture (FPD), and implant therapy was requested by the restorative dentist and patient.  The first surgery was geared towards extraction of the carious root of tooth #8, the removal of the fixation tack left behind by the previous surgeon and bone augmenation. The plan was to combine an osteoconductive, resorbable bone graft of FDBA (Life Net; Virginia Beach) with an osteoinductive graft of rhBMP-2/ACS (Infuse; Medtronic). One of the challenges presented was the lack of facial and palatal bone for vasuclarity and graft containment.  After reflection of a full-thickness mucoperiosteal flap, tooth #8 was carefully extracted, attempting to preserve the thin walls of the socket, the tack was easily removed and all loose graft particles were debrided from the defect (Fig. 2). The rhBMP-2/ACS was prepared according to the manufacturer’s specifications regarding soak-loading the absorbable collagen sponge (ACS) for at least 15 minutes prior to its application. Strips of various sizes were cut of the sponge and mixed homogenously as possible with FDBA particles. This composite graft allowed uniform distribution of osteoinductive (rhBMP-2) and osteo-conductive (FDBA) elements throughout the graft. After molding of this cohesive graft into the alveolus of #8 and the #7 defect (Fig. 3) a PLGA resorbable mesh (RapidSorb; Synthes) was warmed in a sterile water bath of 70 degrees Celsius and fixed with two resorbable screws consisting of the same PLGA material (Fig. 4). A connective tissue graft from the palatal flap was utilized to provide crestal coverage of the mesh and a facial periosteal releasing incision was performed to provide nearly-complete closure (Fig. 5).

Approximately four months after bone augmentation surgery, a subepithelial connective tissue graft was performed to increase the width and thickness of keratinized mucosa in the anticipated implant placement sites (Fig. 6). At about 8 weeks following soft tissue augmentation and 6 months after bone grafting, dental implant surgery was performed. Prior to surgery, a CBCT revealed significant hard tissue regeneration in the lateral and central incisor positions (Figs. 7A & 7B).  The regenerated height of the ridge measured between 8mm-9mm (Fig. 8). Facial- palatal width was determined to be adequate for implant placement of 3.0mm and 3.5mm implant diameters for the lateral and central incisors, respectively. The plan was to place the implants to the cortical base of the nasal floor and utilize the fixtures and healing abutments as “tent poles” to support the same composite bone graft used in the first procedure (Fig. 9). A large portion of the osteoinductive ACS was applied over the graft and 2.0mm tall healing abutments (Fig. 10), then an amnion- chorion membrane (BioXclude; Snoasis) was applied crestally to aid in soft tissue maturation (Fig. 11) and the site was closed with monofilament sutures (PTFE; Gore) (Fig. 12).

After approximately 2 months healing, both healing abutments are partially-exposed. When the healing abutment on the #7 position implant was loosened, there was detectable movement of the implant fixture. The healing abutment was re-tightened. The #8 healing abutment was easily removed and a fixture level impression was taken. A screw-retained provisional restoration, supported by the single, central incisor implant was indirectly fabricated. An additional healing period of 8 weeks preceded utilization of this implant for fixation of the temporary restoration. During this time, a restorative post and core and new temporary crown was fabricated to improve retention of a single-unit provisional crown on tooth #6. The provisional FPD was sectioned between #6 and #7 and the patient presented for implant temporization. A minor mucoplasty around the #8 implant was done to facilitate access to the healing abutment and its removal.  Prior to seating the cantilevered provisional restoration, the healing abutment on the #7 implant was painlessly removed and re-tightened without any tactile movement of the implant or discomfort. The provisional restoration, which incorporated pink and tooth-colored composite resin was adjusted and tightened to 15 ncm (Figs. 13-15). The patient was referred back to the restorative dentist to begin definitive restorative therapy in the maxillary anterior sextant.  Restorative therapy entailed conventional crown preparation on the natural teeth, combined with a transfer impression of the two implant fixtures Fig. 16). A wax-up was performed of the anticipated restorative outcome (Fig. 17), and computer-assisted abutments (Atlantis; Dentsply) were fabricated for the two implants (Fig. 18). Splinted porcelain fused-to-metal crowns were created for teeth #9-#11, a single PFM crown was fabricated for tooth #6 and splinted, cement retained crowns, incorporating pink ceramics were designed for the two implants (Figs. 19,  20A, 20B). A periapical radiograph demonstrated crestal bone present at the level of the implant platforms, suggesting successful regeneration and osseointegration (Fig. 21).

Severe ridge defects, whether associated with tooth loss and/or failed surgical procedures, can present unique and difficult challenges for the implant team. Often, a combined surgical and restorative approach accomplishes greater achievement than a single entity. Pertaining to management of extraction sites, most clinicians prefer either immediate or early implant placement to better position fixture-insertion prior to the inevitable ridge resorption.12-14 When this is not possible, augmentation of the alveolus can prevent significant bone loss.15-17 The site of tooth #8 was managed with site preservation in this case report. This was the more predictable component of the case presented in this paper. The challenge was regenerating horizontal and vertical height of viable bone in the lateral incisor location, capable of osseointegration. The lack of osseous walls capable of graft containment and providing a

source for vascularity to an inert bone graft was the primary obstacle to overcome. Therefore, a graft with osteoinductive properties, capable of chemotaxis of mesenchymal stem cells from the defect’s periphery, as well as differentiation was a requirement for success in the author’s opinion. The production of vascular endothelial growth factor (VEGF) from invading cells was also critical for the revascularization of the bone graft an eventual modeling and bone remodeling necessary for the regeneration of vital bone in the defect area. BMP-2 has been shown to increase the osteoinductivity of allograft bone in the animal model.18 This material has been successful in the regeneration of bone human extraction sockets, capable of osseointegration with titanium implants.19,20 The only FDA approved carrier for rhBMP-2 is an absorbable collagen sponge. The manufacturer guidelines provide the sponge be “soak-loaded” with the reconstituted protein for at least 15 minutes prior to its insertion in situ. The claim is that the rhBMP-2 is released from the ACS over an approximately 14 day period. The biggest disadvantage to this delivery method is the near-total lack of space-maintenance of the ACS. Clinicians have reported on incorporating space-providing modalities with rhBMP-2 to compensate for this disadvantage.21-23 The addition of particulate bone grafts increases graft volume, but not necessarily stability in situ.

A rigid mesh is capable of containing the graft without obstruction of nutrients from the surrounding tissues associated with membranes.  The authors have combined mineralized allograft bone with rhBMP-2/ACS to add an osteoconductive component to the inductive rhBMP-2/  ACS graft. For purposes of graft containment and more importantly, space-maintenance, a resorbable mesh was implemented to provide long-lasting support for the underlying regenerative process. The virtue of the resorbable mesh is mainly the biodegradation, facilitating less invasive flap reflection for implant placement since the mesh and fixation screws/tacks do not require removal. A porous PLGA material, similar to that used in this case, was shown to facilitate bone regeneration in experimental sites in dogs.24 Numerous reports of titanium mesh being used as space-maintenance have been published. The incidence of premature exposures and compromised outcomes have also been reported.25 The resorbable mesh utilized in this case report has demonstrated easier management of early mesh exposures compared to titanium scaffolds in the author’s experience.

Meeting the patient’s esthetic expectations are at least as challenging as the clinical procedures often faced surgically and prosthetically. In order to provide a result, the patient will be satisfied with, even when heroic surgical treatment has been accomplished, we must depend on the prosthetic team to make up for any deficiencies surgery did not accomplish. These scenarios could be for example due to the type of defect, loss of adjacent periodontal ligament and existing blood supply, thus resulting in some instances in different bone height and corresponding soft tissues. Among the prosthetic objectives for the final restoration are: duplication of color, shape, translucency and texture. Even when these previous concepts are accomplished, patient’s expectations may still not be met, especially when the resulting crown will have a long gingival-incisal anatomy. Therefore, to overcome this problem, and with the attempt to have a correct proportion between the final restoration and adjacent teeth, pink porcelain or composite is often utilized, thus enabling us to have the appearance of a normal size tooth with the correct proportion as it relates to adjacent teeth and just as important to be pleasing to the patient’s smile.